A Laurens family expecting quadruplets is doing everything they can to keep the babies growing and thriving before their anticipated delivery possibly later this month. 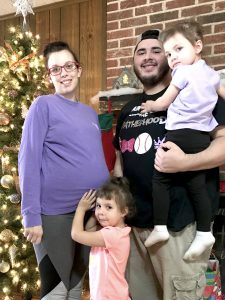 Dylan and Ashley Hernandez of Laurens learned during the summer that instead of expecting one anticipated baby, they’d be having four. After some early labor scares, her physicians admitted Ashley into Self Regional on Christmas night.

“So far, so good,” said Dylan, who has juggled his work schedule in Clinton at AstenJohnson with visits to Self, when he occasionally takes their two little girls to visit their mom.“She’s been having two ultrasounds a week, and the doctors want the babies’ breathing to reach a certain goal.”

The family already met a couple of important milestones, such as making it to the 27-week mark this past Sunday. That means that once the babies are born, they can remain closer to home at the NICU at Self Regional.

Now they just need to grow.

“Three of the babies are about 2 pounds and one is just under two pounds,” Dylan said of the two girls and two boys. A difference of a couple of ounces might not seem too significant, but when considering their tiny size it could be a concern.

“So if people want to pray for the babies to grow that would be great,” he added.

The doctor’s hope to wait until about 29 or 30 weeks to give the steroid shots time to work so their lungs can better develop, Dylan explained, but the couple has been told the babies will definitely be delivered via C-section before 32 weeks, which would be about the first week of February at the latest.

The couple realizes it won’t be easy to care for four newborns, along with their little girls, Sophia and Aubri, and they are grateful for the current babysitting help from Dylan’s mom, Tammy Hernandez of Laurens. But they try not to worry about the future.

“Obviously family and friends will help and we’ll need it,” Ashley had said before she was admitted to the hospital. “But I can’t worry, because stressing about it won’t do me or the babies any good.”

A family member set up a GoFundMe page for the family at https://www.gofundme.com/f9xyh8-suprise-quadruplets.