After two years of delays due to COVID-19, Laurens is finally set to host the one-day festival this Saturday. The festival will kick off with a Biscuit Cook-Off at 10:30 a.m. and continue with eight blues and roots music musicians performing throughout the day.

“The ‘biscuits, blues and bourbon’ T-shirts kind of sell themselves, don’t they?” said Laurens Mayor Nathan Senn, alluding to a ticketed bourbon-tasting event that is planned for Saturday evening. 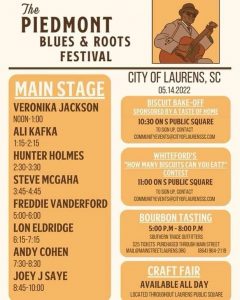 The morning will feature the biscuit cook-off and biscuit-eating contest before Atlanta musician Veronika Jackson takes the city stage on the public square at noon.
Attendees will get a steady dose of the type of blues and roots music that originated in Laurens County by local African-American artists and mill workers, all of whom honed their sounds here.

“I hope this promotes a better understanding of the music that came from here from multiple parts of the community,” said local musician Hunter Holmes, who will take the stage at 2:30 p.m. “I’ll be playing some Piedmont Blues and some cotton-mill music. Some of that literally had blues in the title, like ‘Cotton Mill Blues.’ It was a different style in some ways than the Piedmont Blues, but it’s still music about your situation – whether good or bad – and it definitely came from this area.”

“We’re saying that we’re bringing the Piedmont Blues home, and I really like that idea,” Senn said. “We’re bringing back the gift from here here that influenced the rest of the world musically.”

Holmes and Senn said the lineup of entertainers are authentic practitioners of the Piedmont Blues and roots music that originated in Upstate mill villages. All of it tells the plight of the common man in the early 20th century.

So, Laurens is trying to be authentic as well and attempting to create an atmosphere worthy of a time capsule.

“We want the stage to show what it was like to come to a county festival on the square back in the 1920s when you would’ve heard this music,” Senn said.

The event on the Laurens Historic Square will also feature vendors and a craft fair with crafts reflecting the roots and blues music era and theme of the day. In case of rain, the event will be moved into the Laurens County Museum.

The festival was originally awarded a $10,000 grant in 2019 from Ten at the Top, an economic development group composed of representatives from 10 Upstate counties.
After three years of planning, hoping and planning again, Holmes said he is excited about beginning a new tradition in Laurens.

“I really don’t know what to expect,” he said. “I don’t know if there’ll be 500 people or 50, but either way if there are people out there enjoying the day and hearing music they’ve never heard before, I’ll think it is a success.”