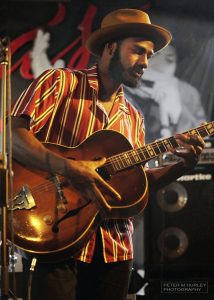 Aurora, Illinois native Joey J. Saye says he can’t wait to get back down South where “it’s green.”

And coming to Laurens for the inaugural Piedmont Blues and Roots Music Festival is a bonus to the scenery and warm climate.

Saye, a bluesman who has played with some of Chicago’s top blues talents and appeared at the Chicago Blues Festival and Merlefest in North Carolina, will close this Saturday’s all-day festival with a set beginning at 8:30.

“Really, the purpose of the festival is what drew me to it,” Saye said. “I hadn’t really done any historical research on Laurens, but now I’m aware that it’s home to Rev. Gary Davis and Pink Anderson, and I’m happy to be part of an event going on that’s meant to honor those blues giants.”

Saye discovered blues music as a teenager in suburban Chicago and was hooked from the beginning. While Chicago blues is its own genre, he also migrated to the Piedmont Blues after hearing the songs of Memphis Minnie and Blind Boy Fuller.

“I can really pinpoint my influence to a guy like Blind Boy Fuller,” he said.
Now Saye, 29, plays professionally and has a residency at Rosa’s Lounge in Chicago each Thursday night, releasing original music and covers digitally in addition to live performances internationally.

Wherever he is, Saye is playing in a style influenced by the likes of Fuller, Anderson and Davis.

“Mom used to tell me I went from turning 13 straight to 85,” he said. “The music can be extremely old, but when it hits someone’s ears for the first time, it’s always new.”