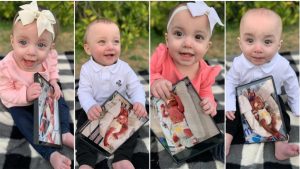 BIRTHDAY QUADS – Arianah, Gabriel, Isabella and Jacobi Hernandez of Laurens hold pictures of themselves from a year ago, when they were spending their first two months in the NICU at Self Regional. Photos provided.

Laurens, S.C. – What better way to represent how far their babies have come than to picture them with photos from one short year ago, when Dylan and Ashley Hernandez of Laurens were spending their days in the Self Regional Neonatal Intensive Care Unit and welcoming prayers for their four premature babies. On Saturday they were the stars of their party with extended family who celebrated their first birthday.

“It was Ashley’s idea and we thought we’d be able to get a picture of all four of them at once with their pictures but that wasn’t going to happen,” Hernandez said. “Pretty soon we’re hoping to take them to visit the nurses at the NICU so they can see how much they’ve changed.” 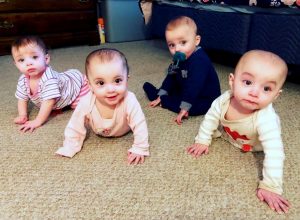 MOBILITY – The Hernandez babies began sitting and crawling one after the other until they were all moving places. Photos provided.

A year ago two boys, Jacobi and Gabriel, and two girls, Isabella and Arianah, were delivered by C-section on Jan. 30, 2019, thrilling their sisters, Sophia and Aubrey, ages 4 and 3. Ashley had spent more than four weeks in the hospital to ensure the babies could make it to at least 27 weeks, and they were born at 30 1/2 weeks at respectable sizes for quads, weighing from 2 pounds, 10 ounces to 2 pounds 14 ounces.
Now they range from 15 pounds to 20 pounds, which pleases their pediatricians, and they’ve had no health scares typical of some preemies. Isabella has her dad’s dark eyes and Jacobi has his mom’s green eyes while Arianah and Gabriel are blue-eyed like their sister, Aubrey. 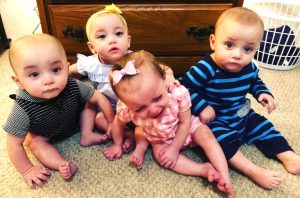 REALITY – Getting four older children settled all at once is hard enough, much less when they’re sibling quads! Photos provided.

“The rough parts were the first couple of months when they first came home because we couldn’t get much sleep, but then we got a good routine going and they usually sleep all night now,” Hernandez said. “Then it was exciting when first one would start to roll over, and then another one followed, and then another and another. Then they started to crawl and now they’re starting to stand up.

“They still need our undivided attention,” Hernandez said, “but once they could sit up if felt like they had a level of independence and we started feeling more relaxed.”

The family doesn’t venture out much, but on those rare occasions, they do attract attention.

“A lot of people are still like, ‘Wow, four babies,’ but it feels so normal now so it doesn’t feel really that different from one baby,” Hernandez said.

The babies are entertained by their big sisters and the parents get plenty of help from Dylan’s mom, Tammy, but except for Hernandez’ work at AstenJohnson, Ashley and the family tend to stay home most of the time to avoid sicknesses coming into the home.

On Saturday, however, the Hernandez family made an exception and celebrated the one-year milestone with their children at the home of a family member.

“We’ve been really excited about their first birthday and started talking about it a couple of months ago,” Hernandez said, adding that those who could eat real food enjoyed tacos.