A trailblazing Presbyterian College graduate was posthumously inducted into the 82nd Airborne Division Hall of Fame, joining 15 other members of the elite division’s Class of 2019. 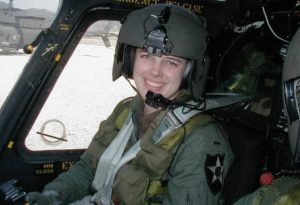 Capt. Kimberly Hampton, a native of Easley, was the U.S. Army’s first female combat pilot to be killed in action when she died from hostile fire on Jan. 2 2004. She was also the first woman in the 82nd Airborne Division to die from hostile fire. She flew an OH-58 Kiowa Scout on her final mission.

According to an article in Stars & Stripes, Hampton was represented at the induction ceremony Wednesday at Fort Bragg, North Carolina by her family. Her father, Dale Hampton, accepted the honor for the Presbyterian ROTC graduate.

“She told us sometime before it happened that she knew we were worried, but (not to) worry about her because if anything did happen, just to remember that she loved what she was doing and was happy,” Dale Hampton was quoted in Stars & Stripes. “That means everything right there.”

He also said his daughter gravitated toward military as part of JROTC and ROTC programs and wanted to become a pilot. She flew

When she was shot down and killed at the age of 28 during Operation Iraqi Freedom, Capt. Hampton was the Delta Troop commander for 1st Squadron, 17th Cavalry Regiment.