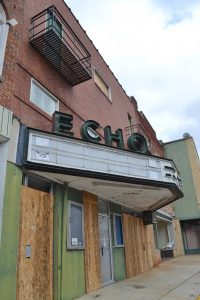 A community meeting will be held in the Laurens City Council Chambers in City Hall tonight to gauge community support and gather ideas for the former Echo Theater.
The meeting was announced during the recent meeting of Laurens City Council and council members and members of the public were asked to attend at 6 p.m. Thursday, March 7, in the second floor council chambers at City Hall.
Moderated by University of South Carolina professor Dr. Jennifer Gunter, the meeting has been organized through a cooperative effort with the City of Laurens. The city hopes that it will include property and business-owners concerned about the appearance and health of downtown Laurens.
Regan Freeman, a recent University of South Carolina graduate from Clinton, is serving as a liaison with Dr. Gunter, and they hope to see the community come forward not only to discuss potential renovations and uses of the former theater but also to seek healing from the two decades it served as the racially-divisive Redneck Shop and the core of the Hollywood film, Burden, which may be released later this year.
Dr. Gunter is the director of the South Carolina Collaborative on Race and Reconciliation, Freeman said.
The meeting was planned so that the community can come together with the property owner, New Beginning Missionary Baptist Church and its pastor Rev. David Kennedy, and other stakeholders to help elicit ideas for a new purpose for the Echo Theater.
Such conversations “can allow residents of Laurens to move past the insane circus which resulted when the Redneck Shop first opened in Laurens and change the narrative of the city,” Freeman said.
Regarding needed renovations, Freeman said that a contractor has already offered to repair the roof of the deteriorating building at no charge. So far suggested uses have included a community center to benefit the people of Laurens or returning it to its initial purpose as a stage and theater for art films for tourism purposes.
Main Street Laurens Director Jonathan Irick said the Echo, like every historic property downtown, can have a great impact if it’s restored with a sustainable purpose.
“From Main Street’s perspective the Echo Theater is an important part of downtown and since the Main Street programs are based on preservation, we feel like this is a positive step toward determining what the future of the building should be.”
Irick noted that the building’s use and subsequent deterioration for the last couple of decades has put a damper on that section of the public square.
“The building and its recent uses were such a negative thing for the people of Laurens, even though it was nothing anyone here supported,” Irick said. “So we are ready to have something more positive which will benefit downtown and the entire community.”
Freeman said the planners of the meeting hope to see many residents from Laurens attend the meeting, including business leaders and area faith leaders.
“We are trying to invite all those who are invested in the Laurens community and we would love to fill the council chambers with people from all walks of life,” Freeman said.
Posted in News and tagged Echo Theater, Historic Downtown, historical building, Laurens SC, Main Street Laurens, Saurens South Carolina