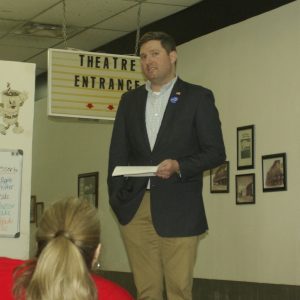 Nathan Senn speaks to supporters Tuesday at the Capitol Theatre after winning the Laurens mayoral election. (Photo by John Clayton)

Nathan Senn said he had a broader, bolder vision for his hometown as he challenged incumbent John Stankus in the City of Laurens mayoral election.

Voters bought into that vision Tuesday, electing Senn as the city’s new mayor with 52.2 percent of the vote. Senn received 447 votes, while Stankus earned 408 votes (47.6 percent) as he sought a second term.

“I had confidence that we had done everything we could possibly do,” Senn said, standing among a throng of supporters at the Capitol Theater after the votes were tallied. “We’d worn out a lot of shoe leather. Whatever the outcome was going to be was going to be OK, but I’m sure glad it turned out the way it did.”

Senn, a Laurens attorney, said he was still attempting to wrap his head around the victory, but also said he was ready to turn his vision of a better quality of life for Laurens residents into reality.

“The first step is to get the community together to get this place cleaned up. We need to see some positive results in the short term,” Senn said, pointing to a litter problem in the city and county of Laurens. “The investment projects we’re going to be working on are more longer term, but we plan on having people come to our Sip-n-Stroll event, so if company’s coming, we want to make sure the place is cleaned up by the time they get here.” 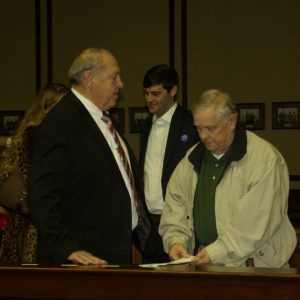 Stankus, who watched the results come in at the Historic Laurens County Courthouse, did not immediately return calls seeking comment.

Senn said he was proud that both candidates ran clean campaigns.

“I think it was important to show that politics can be respectful and that we can disagree about the best way of achieving something and still have the best for our communities in mind,” Senn said. “John has dedicated 52 years to public service, and that’s something to be proud of. We may be of different generations and have different experiences coming into this race, but that’s no reason for me to attack him, and I appreciate the respect John showed me.”

Kelly’s victory in Laurens City Council District 3 also unseated the incumbent. Kelly said he knocked on every door in the district, and he believes that made the four-vote difference.

“I’m excited about it,” he said. “I get a chance to work with some people on issues that people have concerning Laurens. I’m hoping we can all pull together and get some things done. I’m just excited about bringing the voice of the people in District 3 to the city council.”

Douglas wished the both Senn and Kelly luck as they take office and said she would continue to work for Laurens and her district.

“The people spoke, and that’s what democracy is all about,” she said. “The city will go on and good things will continue to happen for Laurens.”

She also suggested Kelly will have a learning curve as he enters office.

“I think Mr. Kelly will see what really takes place in city council and that you can’t always do everything you constituents want,” Douglas said.

All results from Tuesday’s municipal elections are unofficial until they are certified by the South Carolina Election Commission Thursday.