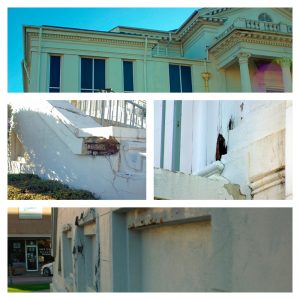 Phase 1 of a project to stop deterioration and fix issues at the historic Laurens County Courthouse was approved by county council. (John Clayton photos)

The Laurens County Council voted Tuesday night at its regular meeting to take the first steps toward restoring the county’s most iconic building.

The Historic Laurens County Courthouse, which sits in the middle of the square in downtown Laurens, could undergo a renovation and restoration that may cost as much as $10 million if council members vote to pursue the complete plan outlined for them by County Administrator Jon Caime and consultants from Greenville-based Craig Gaulden Davis Architects.

Tuesday night, council voted 5-2 to approve Phase 1 of the project, which Caime said would stabilize and protect the 180-year-old building for a cost of around $700,000. The initial phase will upgrade the fire-alarm system, mediate mold issues caused by water leaks, stop water leaks and repair other identified problems and damage where possible.

“This is a very rare asset we have here in this city,” Caime said. “But if you take a close look, you’ll see that this building is falling apart.”

Last year, county council agreed to contract with Craig Gaulden Davis Architects to assess the condition and needs of the historic building. Scott Simmons presented the firm’s report at Tuesday night’s meeting, relaying that the condition of the building is “fair” for its age, but made it clear that there is work to be done in order to sustain the life of the courthouse.

“There’s been a lot of deferred maintenance that needs to be addressed,” Simmons said. “There was some careless remodeling and changes in the 1970s, in particular. Because of that, there’s not much left in terms of the history and character of the building.”

Caime asked council members to add the preservation of the courthouse to its short list of priorities, which also includes $3.5 million for roof and HVAC fixes at the county offices and judicial complex at Hillcrest Square and a new EMS and 911 headquarters.

The efforts to find a space for a new EMS/911 headquarters have been at a standstill for several months, Caime said. He asked council members to maneuver some of those funds, which will come from county general funds until it is paid back through a general-obligation bond later this year, to include $700,000 for Phase 1.

Phase 1 would be followed by an estimated $4.4 million project that would include necessary elements such as HVAC, roof and plumbing issues in Phase 2.

Phase 3 is also estimated at around $3.5-$4.5 million and would restore the building to its “historic glory” if approved by council.

“We’re inspired by what we have to work with here,” Simmons said.

Caime said restoring the historic integrity of the building is “the dream” scenario.

A tentative plan presented by Simmons suggested renovating the courthouse to more closely resemble the 1910-era building inside and out. The project would include windows mimicking those that outfitted the courthouse then and re-opening the ceilings inside the current council chambers.

All three phases of the project would be interconnected, pending approval and funding from the county, and take about two years to complete.

Caime “strongly urged” council members to all the administration to begin Phase 1 of the project. Council voted 5-2 to approve the proposal. Chairman David Pitts and Councilwoman Diane Anderson voted against it.

Pitts said he would rather see the entire project taken on at once, while Anderson said she had issues with funding it prior to issuance of the general obligation bond.