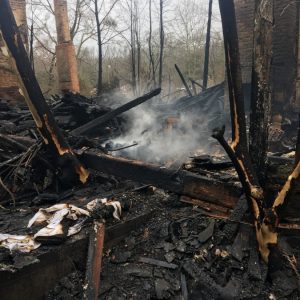 A vacant home was set on fire and destroyed Sunday. Three Laurens teens have been charged with arson. (Brandon Elledge photo)

Three Laurens teenagers have been arrested and charged with arson in a fire that destroyed an abandoned house on Garlington Street Sunday evening.

The identities of the teenagers have not been released by the Laurens Police Department because they are minors. Two of the accused are 15 years old, and the third is 16.

All three have been charged with second-degree arson.

The 16-year-old is being charged as an adult. His case will be heard by a family court judge, who will decide whether or not to send it to 8th Circuit General Sessions Court.

The fire erupted around 5 p.m. Sunday and quickly engulfed the century-old structure.

Laurens Police Chief Bill Hughes said the cause of the fire was suspicious and the Laurens Police Department was called in to investigate.

According to Laurens Police Detective Lt. J.C. Brewington, two witnesses described the three teenagers and investigators were able to track down the suspects from those descriptions.

“(Monday), we went out and started talking to people who were familiar with the area, and we got some names of people that matched the descriptions by the witnesses.”

Brewington said the 16-year-old was also connected with a case of vandalism at the Laurens City Park last year.