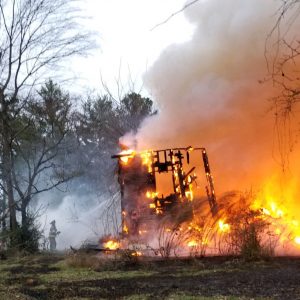 A Laurens firefighter pours water onto a fire that destroyed a house on Garlington Road Sunday. The cause of the fire is under investigation. (Photo courtesy of Brandon Elledge)

Laurens firefighters were called to the scene at 5:27 p.m. Sunday and found the two-story structure fully engulfed in flames.

Laurens Fire Chief Bill Hughes said the cause of the fire has yet to be determined, but it is under investigation by the Laurens Police Department.

“We are considering it suspicious,” Hughes said.

The house was more than 100 years old and had not been lived in for a number of years, he said.

Fire fighters were on the scene for around four hours Sunday and returned several times Monday to vanquish hot spots. Twenty-three firefighters from Laurens and Laurens County responded to the blaze.

No one was injured.

Hughes said no other homes in the area were threatened, but firefighters made sure the fire did not spread from the house to grass and trees on the wooded lot.

“The house was pretty much isolated from other structures,” he said. “It was on a big lot, I think about three acres.”