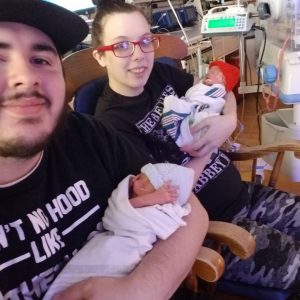 On Thursday Dylan and Ashley Hernandez were finally able to hold Gabriel and Jacobi.

Just over a week ago a young Laurens couple became the parents of quadruplets, when two boys, Jacobi and Gabriel, and two girls, Isabella and Arianah, were born just before 8:30 p.m. Wednesday, Jan. 30, and on Thursday this week the parents were finally able to hold their new babies.

Dylan and Ashley Hernandez had learned last summer they were expecting quadruplets, and Ashley was admitted on Christmas night to Self Regional where doctors worked to keep her from going into early labor.

Hospital bed rest and weeks spent away from her little girls were rewarded when the quads were born. They are small as expected, but at 30 1/2 weeks gestation, the babies had a better head start than most quads, Dylan Hernandez said.
The babies came in respectable quad weights of 2 pounds 10 ounces, 2 pounds 12 ounces and two in the 2 pound 14 ounce range, and they have regained most of the weight they lost after delivery. 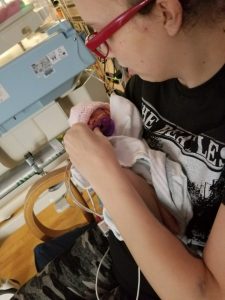 Ashley Hernandez with her daughter Arianah.

“The doctors said they’re doing great,” Hernandez said. “They are amazed and congratulating Ashley for being able to carry the babies as long as she did.”

This past Sunday Ashley was discharged from the hospital. Now the couple is living the NICU world with daily visits to the hospital to spend as much time touching and talking to the babies as possible, while still parenting their two little girls, who have been cared for by Dylan’s mom, Tammy Hernandez.
“It’s bittersweet because we don’t like to leave them,” Hernandez said, “but now Ashley can go home and be with the girls,” who are excited about eventually meeting their little bothers and sisters.
“Right now the girls can’t see them because the hospital isn’t letting children come in because of the flu,” he said.

Meanwhile, the couple has a bit of a rock star status at the hospital, 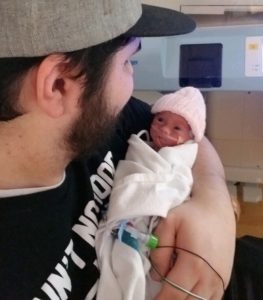 Dylan Hernandez with his daughter Isabella.

where quad births are unusual.

“Everybody is excited and they either know us or they know there’s quads, and then find out it’s us,” Hernandez said. “We don’t mind because we like talking to people about them.”
Except for the gasoline usage in their daily trips to Greenwood, the couple has no specific needs until they take the babies home, likely late March or early April. The family has a GoFundMe Page, at https://www.gofundme.com/f9xyh8-suprise-quadruplets.
Posted in News and tagged gofundme, Laurens County SC, Laurens SC quads, quadruplets, SelfRegional, surprise quadruplets