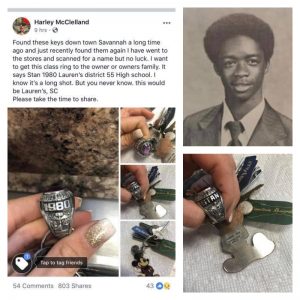 A package holding a treasure was on its way to Laurens native Teri Irby and her family this past weekend.

The Laurens District High School class ring belonging to Irby’s father, Stan Neely, had been lost years ago and thought to be gone forever.

“He mentioned it quite a few times,” Irby said. “When I graduated, he mentioned that he had a class ring, but he lost it and didn’t know where he had lost it. He never said when or where or anything like that. He just told me he lost it.”

Neely graduated from LDHS in 1980, but passed away in February of 2016 at the age of 52. He left behind wife Sharon, son Funtello and daughter Teri, grandchildren and siblings.

And one almost forgotten class ring.

Harley McClelland was on a prom date in Savannah, Georgia’s historic downtown in April of 2017 when she noticed something shiny.

The date was heading to Aligator Soul, a southern-style restaurant that sits just off of Telfair Square. Telfair Square is one the city’s famed tiny parks weaved into its streets and a favorite spot for prom and wedding photos.

McClelland picked up the shiny object, a Mickey Mouse keychain looped through a high school ring. The words Laurens District High 55 School circled a purple stone. One side of the ring read 1980, the other side, “STAN.” Then initials “SFN” were engraved inside the ring.

McClelland held on to the ring and the keychain, hoping to somehow locate the owner, but they were soon misplaced again.

When it resurfaced again in December, McClelland decided to make a concerted effort to reconnect the ring with its owner and posted a photo of the ring on Facebook.

After several shares, the post found its way in front of Laurens residents and eventually to the Class of 1980 group page. There, the mystery was solved.

There were a couple of guys named Stan in the LDHS Class of 1980, but “SFN” stood for Stanley Funtello Neely.

McClelland, a recent graduate of South Effingham High School outside of Savannah, said getting the ring back to its home was important for her.

“I never received one in high school – my family didn’t have the money – and I remember how important they were to my friends,” she said. “I couldn’t stop thinking of how I would feel if we would have somehow saved up for one and then lost it later down the road.

“I felt like a class ring is something a family member would definitely want to keep, and it holds a lot of memories for the owner as well.”

The ring was shipped out from southeast Georgia just after Christmas and headed toward Irby’s Laurens residence.

With it comes a lot of questions for Irby, including how did it end up in Savannah? Had it been sitting on Telfair Square somehow for nearly 40 years? What does it all mean?

“That’s what I’m trying to figure out,” Irby said. “I’m not sure what the meaning of it is, but I’m just glad to get the ring back.”

After high school, Neely enlisted in the U.S. Navy and was stationed in Florida, probably at the Naval Station Mayport in Jacksonville.

Irby said she didn’t know much about her father’s military service, but remembered him saying he had worked on the USS Nimitz, a supercarrier Christened in 1975 and among the largest warships in the world.

Though the Nimitz was based in Norfolk, Virginia, the aircraft carrier was on the Jacksonville coast in 1981 when a EA6B Prowler radar-jamming plane crashed on the ship’s flight deck, causing explosions that killed 14 and wounded 48 sailors.

Regardless of where it’s been or how it got there, Irby said she is happy to have a connection with her father back in the hands of the family.

“Around Laurens, he was very well known and loved,” she said. “And he was an awesome father.”