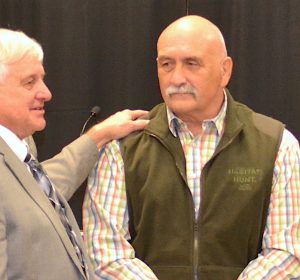 District 14 South Carolina Rep. Mike Pitts of Laurens has announced his retirement from the state legislature, citing advice from his physicians following an October heart attack and ensuing surgery.

Pitts, who was re-elected to office after running unopposed in November’s General Election, sent a release to news media mid-afternoon Sunday, and offered it as a Facebook post soon after.

“Thank you for the incredible honor and privilege of representing the finest citizens of South Carolina for the past 16 years,” Pitts wrote. “I have given you my best effort, standing firm on principle while building alliances to help lead our state forward. This is how a democratic republic is supposed to work. You may not have agreed with me at times, but you always knew with certainty where I stood on any issue.”

Pitts referred to previous health concerns during his tenure in the state legislature, where he has served for many years as a member of the House Ways and Means Committee, the important committee which develops the House version of the budget each year. Within that committee he previously chaired the law enforcement division and worked for, but didn’t always succeed, in increased funding for the South Carolina Highway Patrol and SLED.

Pitts has became known for putting forth controversial bills, including a bill this past spring to combine the Laurens and Clinton school districts, yet he has also won numerous awards from bipartisan environmental groups for his work to try and retain funding streams for the State Conservation Bank.

But his health concerns are behind his sudden decision to step down from the state House of Representatives.

“During my tenure, I have faced some harsh personal challenges with two rounds of cancer treatment, and on October 20 of this year, a heart attack and surgery. My doctors say I can make a full recovery in time, with patience, rehabilitation, a far less hectic schedule and a reduction in stress,” Pitts wrote, adding that with his increased demands of chairing the House Ethics Committee, in addition to Ways and Means committee work, made it impossible to decrease his work load.

“With that said, based on the advice of my doctors and my family … I have decided I should retire from the legislature,” Pitts wrote. “My plans are to remain active in another capacity with a more singular focus and more manageable schedule to maximize my effectiveness.”

Pitts’ retirement will be effective later this month on Dec. 31, and his official resignation will be take effect Jan. 3, right before the Jan. 5 winter term begins in the House. A special election will be held sometime next year to fill his position, and Pitts recommended that constituents consider a run for his seat.

“To the handful with all the answers, here’s your opportunity to step into the arena,” Pitts wrote. “To those who don’t have all the answers but are ready to ask the right questions, I implore you to prayerfully consider public service.”

Pitts has faced opposition in the past, most recently in 2012 when he was opposed by Democratic candidate Ed Taylor, also from Laurens. In 2014, 2016 and 2018 he faced no opposition.

For more on Pitts’ tenure in the state legislature and his announced retirement, see this Wednesday’s edition of The Laurens County Advertiser.