Greenville, Laurens counties, South Carolina –  The Reedy River flows 65 miles from its origins near Travelers Rest, through the popular Falls Park in downtown Greenville and eventually through western Laurens County and into Lake Greenwood. The river and its wetlands are also important to the Conestee Nature Preserve, a non-profit which includes more than 400 acres of trails and wildlife habitat about seven miles south of downtown Greenville. 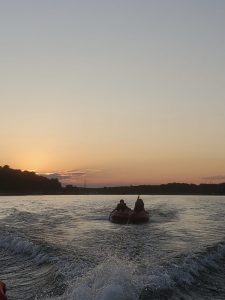 Lake Greenwood is a recreation destination and provides water for Greenwood and Laurens counties, but could be impacted if the aging Lake Conestee Dam fails and releases century-old toxic sediment in the Reedy River. Photos: Tara Brown Edwards

However, in addition to numerous trails, platforms for bird watchers, an adjacent City of Greenville park and dog park, the Conestee property also includes the 130-year-old Lake Conestee Dam, and concerns have resurfaced recently about the environmental damage that could occur if the historic, stone masonry dam fails.

At issue is not the flow of water over the crest of the dam, which occurs occasionally, but rather decades worth of toxins and waste within the sediment at the base of the dam, explained Conestee Nature Preserve Operations Director Erin Knight.

Not a new problem

Built in the late 1880s to early 1890s, the dam quickly became a stopping point for City of Greenville waste and the numerous textile mills built upstream.

This isn’t a new problem, Knight said, and for several years the non-profit board and staff have sought funding while working with engineers and DHEC to develop an affordable solution.

“When Conestee Nature Preserve was founded by a small nonprofit with a vision of preserving wildlife habitat and providing public access to a natural space near the heart of urban Greenville, the organization also inherited a problem of historical contamination and an aging dam,” Knight said in a release issued Friday to The Laurens County Advertiser. “Studies over the years determined that the contaminants pose no threat as long as they, and the newer sediments above them holding them in place, remain undisturbed. That fits perfectly with the mission and vision of Conestee Nature Preserve, but it means the dam must remain in place.” 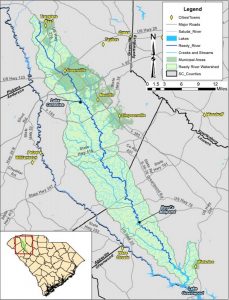 While Conestee Nature Preserve board and staff members worked to raise funds, they have also met with engineers and DHEC officials who regularly test the water and nearby soils and the dam structure.

The historic dam is one of the few stone masonry structures regulated under the South Carolina Dams and Reservoir Safety Act, explained DHEC Spokesperson Ron Aiken, and DHEC staff are aware of its problems.

“Sampling that was conducted 20 years ago detected the presence of metals, pesticides and, most prevalent, polycyclic aromatic hydrocarbons (or PAHs) within the sediment at concentrations above EPA levels acceptable for unrestricted use,” Aiken said. “DHEC staff have determined failure of the dam would likely cause interruption of use or service based on a temporary halt in withdrawal of water from drinking water intakes in Lake Greenwood due to the risk of impacts from the contaminated sediments.”

The Conestee Nature Preserve has an agreement with DHEC to maintain the dam to prevent the release of the contaminated sediments, Aiken said; however, DHEC has realized Conestee lacks the resources to carry out this responsibility and has been taking part in meetings with local leaders and elected officials to help Conestee address the needed repairs.

Funds finally came through last summer, when the state’s budget included in its Special Appropriations $3 million for the Conestee Dam Emergency Mitigation for fiscal year 2023. The funds are being managed by DHEC until the time comes that the work can get underway, Knight said.

“With $3 million in hand and a clear plan to secure all necessary funds in 2023, Conestee Nature Preserve has a team of consultants and engineers, a DHEC-appointed trustee and meets regularly with regional stakeholders,” Knight said.

Others in these regular talks include ReWa, which is a neighbor to the Conestee property, officials from Greenville, Greenwood and Laurens counties, DHEC, lead and secondary engineering firms, Duke Energy and Greenville city and county staff.

A project on this scale cannot be completed with $3 million, however, so Knight said meetings continue as the non-profit seeks additional funding through grants, regional stakeholders such as the City of Greenville and Greenville County, corporations and the State of South Carolina.

“Together these should fund the project in full,” Knight said, “and Conestee Nature Preserve is on the verge of resolution.” 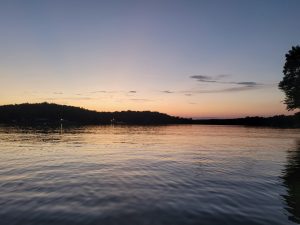 Locally, Laurens County Water and Sewer Executive Director Jeff Field has been part of some of those talks, and he said he is encouraged that the project has attracted enough attention to begin to bring in funds. While Field has not heard a specific amount, he feels certain that Conestee Nature Preserve board and staff will be able to pull the needed funding from the state and Greenville area stakeholders.

“DHEC has made it a priority and when you have the head state agency start getting the support of elected officials, it brings results,” Field said. “The $3 million was a terrific first step.”

DHEC and EPA have done multiple sediment and dam structure studies and reported that currently the toxic sludge appears to be well encapsulated within the good sediment, Field said, and current testing shows the water downstream near Laurens County is safe. An algae bloom more than 20 years ago resulted in better regulations which have made a difference in the waters entering Lake Greenwood.

“There’s always a lot of eyes on the Reedy and the Saluda, and we have been part of those groups for some time,” Field said. “But because of the urgency of the Conestee Dam, our part in the stakeholders’ meetings have increased. I think it has the momentum to get this done.”

Right now the water in Lake Greenwood is in great shape, Field said, and with about 45 miles between the dam and Lake Greenwood, no one can speculate exactly what the negative impact would be here if the dam were to break.

“We’re all pushing as much as we can for this, and I want to see these dollars committed,” Field said. “I hope this coalition stays together and stays till the end.”

“Solving problems as complex as this one takes time,” Knight said, “but thanks to all these partners and to much public support, Conestee Nature Preserve is on the verge of resolution.”

This story originally ran Page 1 in the Jan. 25, 2023 issue of  The Laurens County Advertiser.