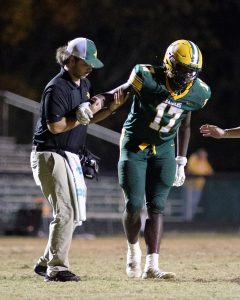 LDHS student athletic trainer Mason Gibbs, left, helps Raiders DE Malik Jackson off the field after an injury against Indian Land. Gibbs was selected for the Shrine Bowl of the Carolinas Saturday at Spartanburg High School.

Laurens quarterback James Rawl didn’t know his season was over due to a knee injury as he lay on the field at K.C. Hanna Stadium, just short of a touchdown.

But he knew Mason Gibbs was there to help.

“When I ran out there, it got on a knee and said, ‘James, it’s OK, I’m here,'” Gibbs recalled. “Later on, he told me that the second he saw me, he immediately calmed down, and that’s something I think about a lot. I’m really appreciative of that.”

Gibbs has wrapped countless ankles, carried water bottles and helped treat injuries large and small as a student athletic trainer at Laurens District High School, and now he has been named a trainer for the annual Shrine Bowl of the Carolinas.

The 86th edition of the prep all-star game is scheduled for 1 p.m. Saturday at Spartanburg High School, returning after a two-year hiatus due to COVID-19. Gibbs arrived along with players Sunday for the week’s practices.

“I feel like it means that my past three years of hard work has actually paid off,” Gibbs said of being selected for the Shrine Bowl, which is an honor for student trainers not unlike for players. “It actually means that I have some true talent in this and that I’m really good at what I do.”

As a freshman, Gibbs arrived in the LDHS training room for a different reason. A shoulder injury derailed his wrestling career, so he started helping out around the training room.

Then, one day he was asked if he wanted to work as a student trainer at a Raider football game. 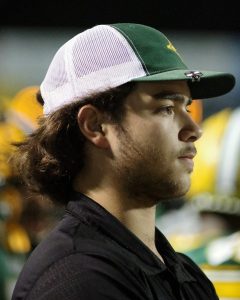 “I’ve taken two sports medicine classes, and both of them have been really interesting,” he said. “I do have a passion of learning about things I’m into. So, being able to learn about like the human body and how to help with injuries and different types of injuries – that’s always been really cool to me.”

Gibbs has been there every football Friday night since. He has also helped treat athletes in other sports under three different professional trainers at LDHS, including current trainer Amy Collins.

“You have to learn your boundaries of what you can and can’t do with the different trainers,” Gibbs said. “But it’s been a fun ride. I’ve learned many things from all the trainers. This year has been fun. I’ve enjoyed working with Ms. Collins she’s just really fun to work with, and she’s really has helped me with my skills and with the different things I’ve been able to do.”

Next year Gibbs will begin his studies toward a career as an athletic trainer at Charleston Southern.

“I’ll go into the athletint training programs there,” he said. “I’m not too sure about immediately being able to get onto a staff I like as a freshman, but I know I plan on trying to get on staff later on if I’m able to.”

After he leaves Charleston Southern and the Bucs athletic program, he plans on having his Master’s Degree and a future in a profession he said he has already “fallen in love with.”

“Charleston Southern offers a five-year program, so I’ll get my Master’s in that time,” he said.

And he will have a Shrine Bowl on his resume along with that degree.

“When you get recognized for something big like (the Shrine Bowl), it feels like it’s all worth it,” he said Sunday before leaving for Spartanburg.