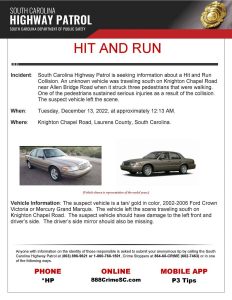 Investigators from the South Carolina Highway Patrol are seeking a suspect in a hit-and-run incident that occurred just after midnight Tuesday morning.

According to a release from the SCHP and the Laurens Police Department, the incident occurred on Knighton Chapel Road near Allen Bridge Road and involved three pedestrians, one of whom suffered serious injuries.

The suspect was driving a large sedan believed to be a tan or gold 2002-06 Ford Crown Victoria/Mercury Marquis. The vehicle should have damage to the left front and driver’s side body. The driver’s side mirror may be missing, police said.

Anyone with information can contact the SCHP or CrimeStoppers.