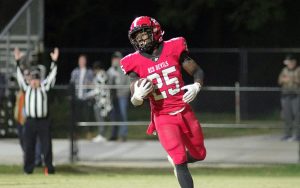 After the final buzzer Friday night at Clinton’s 49-27 third-round Class 3A playoff victory over rival Chapman, Clinton head coach Corey Fountain had a simple message for the Red Devils gathered on the Wilder Stadium turf around him:

Now, Powdersville is part of the “unfinished business” mantra Fountain and the Red Devils have repeated since their third-round loss at Daniel in last year’s playoffs.

The Patriots now stand between Clinton and its first Upper State championship since its 2009 state title run.

“We’ve got to cut down on penalties,” Fountain said. “We have to secure the football 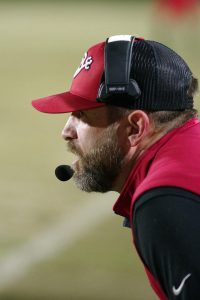 and maybe gain a possession – cause a turnover, so we’re putting an emphasis on that. . . . We’ve got to tackle well this week.”

“Obviously, we have to stop the run, which (the Red Devils) do better than any other team we’ve seen this year,” said Powdersville head coach Robert Mustar. “We have to come out and play our brand of football and cut out the turnovers that we had last week.”

The Patriots are not without a running game of their own behind senior running back/defensive back Thomas Williams, a three-star recruit and Virginia Tech commit who is also headed to this year’s Shrine Bowl. Williams scored on a 71-yard run against Daniel in the first half and then scored the game-winning 2-point conversion on a run with 8 seconds to play in the Patriots 36-34 win over the two-time defending state champion Lions. He finished with 174 yards rushing for the game.

“If anybody thinks he’s a 3-star kid,” I don’t know how you can get more stars than what he’s got,” Mustar said. “I’m biased, but I haven’t see another kid like him. He never comes off the field.”

If that sounds familiar, Clinton running back Bryson James is a finalist for the South Carolina Mr. Football Award and leads the Red Devils’ vaunted rushing attack, which produced three runners with at least 130 yards apiece against Chapman.

“Having those two caliber-type kids in the same game is going to be special,” Mustar said.

Dual-threat junior quarterback Eli Hudgins scored the Patriots’ final touchdown against Daniel on a bootleg and triggers the Powdersville offense.

“It’s going to be a great game,” Fountain said. “They’ve got one of the most explosive running backs I’ve seen on film this year.”

Tickets for Friday’s game – Clinton’s first playoff contest away from Wilder Stadium this season – are being sold online at PowdersvillePatriotAthletics.com. Tickets can also be purchased at the gate for $10 each. Fans are asked to bring correct change in an effort to cut down the length of the ticket line. 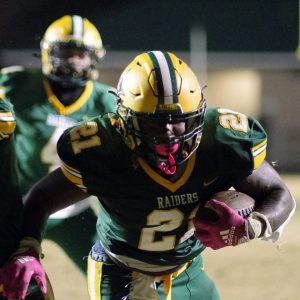