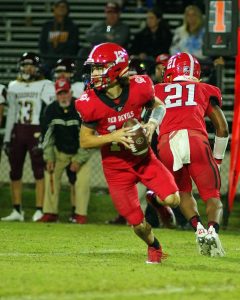 Clinton QB Bryce Young (12) figures to be the starter the rest of the way for the Red Devils, who lost starting QB Austin Copeland to a knee injury. (File photo by John Clayton)

Clinton clinched the Region 2-4A championship Friday night with a 48-20 victory at Chester.

The Red Devils, ranked No. 3 in Class 3A, got 100-yard rushing performances from Jishun Copeland, Bryson James and Jaden Robinson, who ran for a career-high 181 yards with two touchdowns on 13 attempts, scoring on runs of 9 and 28 yards.

Copeland rushed for 173 yards and a score on 16 carries while James turned in 111 yards and two touchdown on 18 rushes.

A week after setting a new program record with 526 rushing yards, the Red Devils rolled up 482 yards on 52 carries.

Clinton learned earlier this week that starting quarterback Austin Copeland, who was injured while playing at safety on the opening series of last week’s win over Woodruff, will miss the remainder of the season due to a torn anterior-cruciate ligament (ACL).

Junior Bryce Young, who played the entire game at quarterback against Woodruff, took over at quarterback for the third time this season and completed 1 of 2 passes for 2 yards, but his lone completion went for a 2-yard touchdown to James for one of his three scores on the night.

The Red Devils scored the next 27 points before Chester (6-4, 3-1) finally got back on the board in the third quarter.

Chester running back Malik McCullough ran for a team-high 132 yards and scored on a 9-yard reception from Floyd for the Cyclones.

Clinton improved to 9-0 overall and 3-0 in the region with the season finale scheduled for Friday at Emerald. The Red Devils now own head-to-head wins over Chester and Woodruff, the other top two teams in the region.