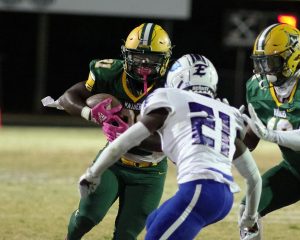 Laurens RB/LB Gemire Darden (21) rumbles for a first down Friday night against Eastside.

This time, Laurens made its first-half lead stand up.

The Raiders jumped out to a three-touchdown lead by halftime and hung on for a 24-15 Region 2-4A victory over Eastside Friday night at K.C. Hanna Stadium. LDHS ends its regular season at 4-6 overall and 3-1 in region competition.

The victory comes a week after the Raiders let a 14-0 lead slip away against Riverside, which has the inside track to a region championship.

Now, the Raiders have to play the waiting game. Greer and Riverside play one another next Friday as LDHS has a bye week. If Greer defeats the Warriors, there will be a three-way tie atop the standings and a tie-breaker will be used to determine seedings for the playoffs while all three teams will claim a share of the region championship.

Senior Gemire Darden scored a pair of first-half touchdown runs of 3 and 10 yards. Darden led the Raiders with 67 yards on the ground. Laurens quarterback Nick Fowler sprinted for a 47-yard touchdown with 7:14 left in the second quarter, and Roberto Luna added a 31-yard field goal on the final play of the first half to put the Raiders ahead 24-3.

But Eastside recovered a pair of short kickoffs, the first of which opened the second half and put pressure on the Raiders defense as the Eagles dominated the time of possession over the final two quarters. 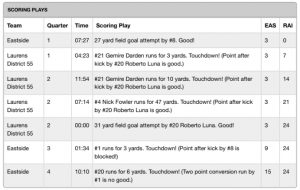