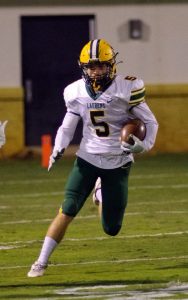 Laurens held off Wade Hampton Friday night, making an early lead stand up in a 45-35 Region 2-4A victory that kept the Raiders’ hopes for at least a share of the region title alive.

The Raiders built a 35-6 lead by the middle of the second quarter, but the Generals roared back with two scores before halftime to cut the lead to 35-21. Cooper Tankersley’s third touchdown a pass of the game brought Wade Hampton to within 35-28 with 1:07 left in the third quarter.

But the Laurens defense did just enough from that point to thwart the Generals’ comeback.

Roberto Luna’s 38-yard field goal extended the Raiders’ lead to 38-28 with 9:52 left in the third quarter, and Laurens needed that kick.

The Raiders found the end zone for the first time since the second quarter on quarterback Nick Fowler’s 5-yard run with 53 seconds to play.

Fowler completed 8 of 12 passes for 210 yards, two touchdowns an interception. Both of Fowler’s touchdowns passes went to Cayson Elledge, who opened the scoring with a 60-yard touchdown reception and then scored from 18 yards out with 11:30 left in the second quarter.

Jordan Roberts added a pair of 6-yard touchdown runs, and Gemire Darden added an 8-yard score in the second quarter for the Raiders (3-6 overall, 2-1 Region 2-4A). Darden led Laurens with 65 yards rushing.

Laurens ends its regular season next Friday (Oct. 21) at home against Eastside (2-6, 0-2), which lost Friday to Riverside, 48-13. The Raiders’ bye week fell on the final week of the regular season for most teams.