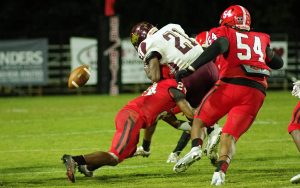 Clinton found itself down two starters due to injuries before its first offensive possession, but that bit of adversity did nothing to derail the Red Devils Friday night against Woodruff.

Playing without starting quarterback/safety Austin Copeland and linebacker Brett Young, both of whom suffered leg injuries soon after Woodruff took the opening kickoff, the Red Devils rolled up 618 yards of total offense en route to a 59-20 Region 4-3A homecoming win over Woodruff at Wilder Stadium.

The injuries forced backup quarterback Bryce Young into action, and he responded by completing 4 of 6 pass attempts for 92 yards and a touchdown as running back Bryson James ran for 193 yards and three touchdowns on 16 carries.

“Bryce was able to come in and operate the way we needed him to operate,” said Clinton head coach Corey Fountain. “We were a little slow in the first half, but we were able to pick up the operation in the second half.”

James scored on runs of 2, 14 and 1 yard, leading a Clinton rushing attack that dominated the game with 526 yards. Jishun Copeland, who ran for 128 yards on nine carries, added touchdown runs of 6 and 5 yards, and Trey Cook scored on a 7-yard rush.

The Wolverines erupted in the second quarter for all of their points. Quarterback Kory Scott and receiver D.J. Nash connected twice for scores of 57 and 54 yards, and Bryant Whiteside added a 4-yard touchdown run with 27 seconds left before halftime, cutting a comfortable Clinton lead to 33-20.

But the unbeaten Red Devils answered, driving down the field quickly and scoring on the final play of the half on Brice Young’s 36-yard pass to Justin Copeland to extend Clinton’s lead to 39-20 at the break. Copeland also intercepted a Scott pass and returned it 55 yards for a touchdown with 8:29 left in the first quarter.

Clinton (8-0 overall, 2-0 region) followed score before the half with a three-play, 57-yard drive that James capped with a 14-yard run with 11:11 left in the third quarter, turning a two-score game and what appeared to be a glimmer of hope for Woodruff (4-5, 1-2) just before halftime into an insurmountable 46-20 Clinton lead in the opening seconds of the third quarter.

Fountain said both Austin Copeland and Brett Young would be checked out by doctors on Monday to determine the severity of their injuries. Both players were on crutches on the Clinton sideline for the remainder of the game against Woodruff.