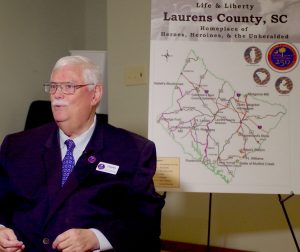 A NATION’S BEGINNINGS – Charles Baxley, chairman of the state-level 250th Sestercentennial Commission, commended Laurens County historians for their work to tell stories of the county’s people and places during the War for Independence. Photo by Judith Brown

Laurens County, S.C.  – In 2026 the nation will celebrate the 250th anniversary of its independence, and historians throughout the state are working to tell the stories of South Carolinians who lived through that time.
“We want to tell the stories of South Carolina. We want to tell them from points of view that we’ve never been told before,” said Charles Baxley, the chairman of the  South Carolina American Revolution Sestercentennial Commission, which recently met with local committee members at the Laurens County Museum.
“Nobody much has talked about the women and children that were here who suffered greatly,” Baxley said, adding that among educated residents, those loyal to England were about equal in number as those who were not. “No one much has talked about the African Americans who were enslaved and the Native Americans who were here. The Catawba Indians allied with South Carolina, the Cherokee allied with the British. We want to discover these stories and tell them accurately.”

Baxley was in Laurens for the quarterly meeting of the state-level American Revolution Sestercentennial Commission, which includes Diane Culbertson of Gray Court. It met at the Laurens County Museum with the Laurens County Sestercentennial Committee, which has been tasked with developing and promoting the local angle for the upcoming 250th anniversary of the nation’s independence.
Over next two to three years, the county committee wants to use grant funds to develop a driving trail, with signage marking the specific sites which are known to have had Revolutionary War significance within the state.

“There have been 14 sites of significance determined to have taken place in Laurens County,” said Ernie Segars, the Laurens County Sestercentennial Committee’s chairman. “The sites are all over the county, from near Joanna to Cross Hill to the Greenville County line.”
They include some which are more familiar, such as the battle of Musgrove Mill at the site historic site, and Hays Station which has a marker in place not far from the Newberry County line.
Others are known by the general location where they occurred, such as near Langston Baptist Church outside Clinton, where a young woman named Dicey Langston acted as a spy to gain information from the British and report it to Patriot militia.
Another location is Hammonds Store near Greenplain Road outside Clinton, and it is one of the Revolutionary War sites the committee hopes can be developed.
“There are probably a half dozen sites which we will be able to spend money to develop beyond just a simple sign,” Segars said, “but we hope to have the interactive technology connected to all 14 of the signage and the sites even if we don’t know the exact location.
“We have grant funds to work with and we now have about three years to develop several of these sites and the signage.”