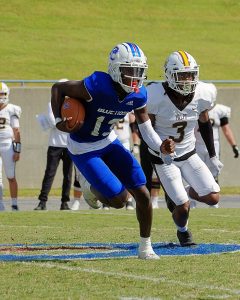 But for one half of solid football, PC found a formula for some success with a true freshman at quarterback, taking a 21-14 lead into the break.

“It was a tale of two halves,” said first-year PC head coach Steven Englehart. “We obviously had a lot of great energy in the first half and were able to battle and go up at halftime. Our guys have to be able to handle success.”

It’s easy to understand why that could be an issue.

Saturday’s was the first game against an NCAA Division I opponent the Blue Hose had led at the half since a 14-10 advantage over Davidson in the 2021 spring season, which was necessitated after COVID-19 forced the cancellation of the 2020 fall season, a stretch of 15 straight Division I games that includes 14 straight losses. PC has beaten three NAIA opponents during that stretch.

Valpo was one of those losses last season. PC traveled to northwestern Indiana and suffered a 65-55 loss in which the Blue Hose scored late as they scrambled from behind.

The Beacons (3-2 overall, 2-0 PFL) flipped the script a bit this time around, tying the game at 21-21 on a 30-yard touchdown reception from Solomon Davis’ 30-yard touchdown catch from Mikey Appel that was set up by a thwarted trick play that ended with an interception at the PC 35. Wide receiver Dylan Thibault took the ball on an end around and was picked off by Colin Graves with 10:32 left in the third quarter.

Valpo added three more touchdowns in the fourth quarter, scoring twice in the final 6:01 to salt the game away.

Quarterback Mason Kaplan capped a 13-play, 96-yard drive that consumed more than seven minutes of game time with a 9-yard pass to Matt Ross for what proved to be the game-winning touchdown with 14:15 left in the game.

After turning in its best offensive half of the season behind two freshmen quarterbacks, the Blue Hose (1-5, 0-3) were unable to recapture the momentum they had gained over the first two quarters behind dual-threat quarterback Tyler Wesley, a true freshman from St. Cloud, Florida.

Wesley, making his first extended appearance in a college game, led the Blue Hose in passing (230 yards) and rushing (51 yards), accounting for all three PC touchdowns. Wesley scored on runs of 1 and 10 yards and connected with wideout Jalen Jones on a 44-yard touchdown pass to tie the game at 7-7 with 23 seconds left in the first quarter. Jones finished with 5 catches for 116 yards and has 210 receiving yards over the past two games.

Freshman Ty Englehart, the son of Coach Englehart, got the start, but Wesley provided a needed spark off the bench after Nate Hayden, a redshirt junior who had started all five games this season, was ruled out due to a concussion and knee injury he suffered last week against Morehead State.

PC running back Delvecchio Powell II finished with 126 yards from scrimmage with 80 yards receiving and 46 rushing, setting up Wesley’s go-ahead touchdown with a 63-yard reception from Wesley in the second quarter. The 63-yard pitch and catch was the longest play from scrimmage this season for the Blue Hose.

The two late scores, which included a 60-yard touchdown run by Aaron Dawson with 3:34 to play, offset what had been a gritty defensive effort by the Blue Hose. Dawson finished with a game-high 163 yards on the ground.

The Blue Hose travel across the country to face San Diego this coming Saturday. PC is 0-2 in two previous meetings with the Torerros, but both of those have come at PC. San Diego (2-3, 1-1) defeated Drake 22-10 Saturday after its game at Stetson scheduled for Oct. 1 was canceled due to Hurricane Ian.