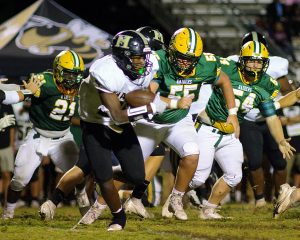 Latimer’s 78 yards was a game high and part of a balanced and potent Yellow Jacket rushing attack that rolled up 394 yards against the Raiders (1-5).

“Offensively, we’ve got to keep working at it,” said LDHS head coach Daryl Smith. “We had a couple of turnovers that hurt us. We’ve just got to find something we can do right now.”

James Rawl, the Raiders’ three-year starter at quarterback, is out for the season with a knee injury he suffered two weeks ago in the fourth quarter of a 24-21 overtime loss to Chapman. Rawl is set to undergo surgery Wednesday, he said.

Laurens senior linebacker Jordan Roberts scored his second defensive touchdown in as many weeks, returning a fumble recovery for a score to cut the Hanna lead to 10-7 with 9:50 left until halftime. Roberts returned an interception 20 yards for a touchdown in last week’s victory over Union County.

Latimer answered the defensive score with touchdown runs of 5 and 2 yards. The 2-yard plunge came with just 17 seconds left in the first half and extended the Yellow Jackets’ lead to 24-7. Class 5A T.L. Hanna (5-1) won its third straight game since suffering a 45-7 loss against Westside on Sept. 2.

LDHS recovered another fumble midway through the third quarter, but fumbled the ball back to the Yellow Jackets on the next play.

The Raiders are set to begin Region 2-4A play next Friday (Sept. 30) at Greer. 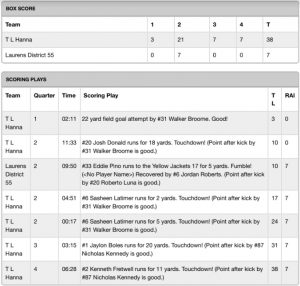