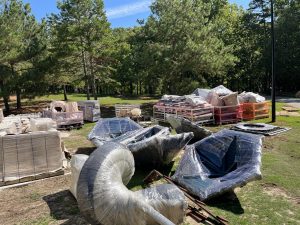 Components of an ADA-accessible park recently arrived and are ready for construction at the Laurens County Park on Calvin Bridges Road.

Laurens County, S.C. – A park designed for wheelchair accessibility and funded by the Capital Project Sales Tax will be located at the Laurens County Park, and Laurens County Parks and Recreation Director Andy Howard said they’ll begin work soon.
“The ADA park equipment was delivered earlier this month and that will be the first park we put in this winter,” Howard said of the Americans with Disabilities Act-certified park, planned for the Laurens County Park on Calvin Bridges Road in Laurens. “It’s going to be a handicapped-accessible playground, and it took two tractor-trailers to get all the equipment here.”
While the ADA-accessible park is pricey, the county obtained an ADA grant of $50,000 to help pay for it in addition to the CPST funds. Howard said.
Material cost increases have had an impact on the projects, but will not be a problem in the long run.
“The ball field light poles were double the cost we budgeted but because I ordered 18 playgrounds at once, I got a huge discount,” Howard said. “Then we got a big discount on the picnic table and shelters because we ordered everything at once, so it balances out the overages and we are not having to cut any of the plans we have for park improvements.”
While the three members of the county’s Parks and Recreations Department have spent most of the summer keeping up with grass cutting and other summer maintenance tasks, materials have been arriving at many of the 20-plus parks which are receiving upgrades through the CPST funding.
“There are a total of three splash pads,” Howard said. “Laurens took over their plans and the other two simpler splash pads will be ready by next summer in Ware Shoals and Joanna.”
The Parks and Rec Department is also overseeing the development of the veterans park at the Laurens County Library, and paving will probably begin this month on the Laurens County portion of the Prisma Swamp Rabbit Trail.