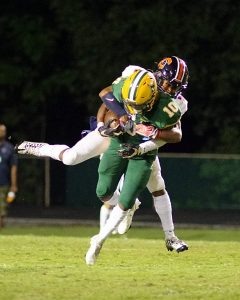 Chapman led only once Friday night against Laurens – and that was when it counted the most.

After tying the game at 21-21 midway through the fourth quarter, the Panthers got a game-winning 24-yard field goal from Jackson Visoury to end the first overtime period and the game.

The Raiders (0-4) got the ball first during overtime, which gives each team a possession starting at the opponent’s 10-yard-line, and attempted a field goal after stalling at the 10. Senior kicker Roberto Luna pulled the field-goal try right, opening the door for the Panthers (1-3) to get their first win of the season.

But for the third time in the game, the Panthers battled back to tie the contest.

Laurens starting quarterback James Rawl started the scoring with a pass to Jay Pulley with just over six minutes left in the first quarter. Pulley’s diving catch in the back corner of the end zone put the Raiders ahead 7-0. He finished with 7 catches for 120 yards.

For the first time, Gray answered with a pass to Rashawn Cunningham.

With Rawl sitting out a play due to injury while the Raiders were in the red zone, backup Nick Fowler found receiver Jackson Martin on a fade route from 18 yards out to put Laurens ahead 14-7.

The Panthers tied the score at 14-14 when Gray and Cunningham connected again with about two minutes remaining in the third quarter.

Laurens will attempt again to pick up its first win of the season when Union County visits K.C. Hanna Stadium next Friday (Sept. 17).