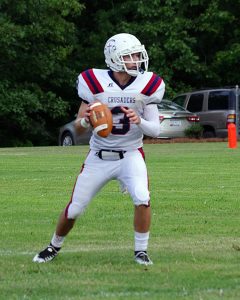 The Crusaders (2-1) got a pair of touchdowns from junior receiver Buddy Baker and two scores from senior running back Clarence Bertoli.

LA trailed 19-16 at halftime, but dominated the second half, keeping the Eagles (1-1) out of the end zone over the final two quarters.