“PAWS is assisting with a puppy mill seizure and need your assistance with foster homes for some of our current residents,” a PAWS social media post read.

Two people have been arrested on animal cruelty charges. 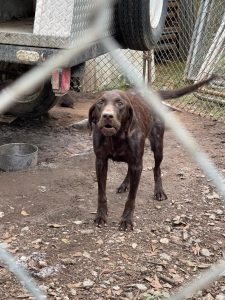 One of the dogs seized at a puppy mill after a raid by the Laurens County Sheriff’s Office.

Anderson County PAWS has assisted Laurens County Animal Control in similar situations in the past, and a PAWS trailer was on scene at the residence on Highway 221 in Enoree.

LCSO Pubic Information Officer Courtney Snow said 43 dogs – all of them Labrador Retrievers – have been seized at the residence since Monday.

“Upon arrival, deputies immediately noticed a female dog with significant hair loss and sores located in a pen without proper shelter along with her puppies,” a statement released Wednesday by the LCSO read. “Several other dogs were located in wire crates covered in feces with no food or water available to them. Deceased dogs were also discovered on the property.”

This is the second raid on a puppy mill in Laurens County in as many years. 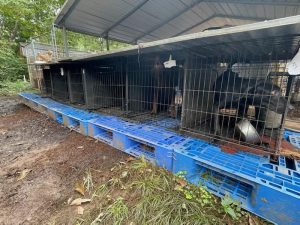 Kennels at the alleged puppy mill in Enoree.

In 2020, Laurens County Animal Control seized 145 dogs from a puppy mill on Indian Mound Road in the Ware Shoals area of Laurens County. In addition to the dogs, over 100 other animals were seized, including cats, rabbits, ducks and chickens.

A mother and son were arrested in that case.

Further information on this week’s arrests and animal seizures was unavailable at press time. Follow developments on this and other stories on laurenscountyadvertiser.net.