In South Carolina, it’s called Week 0, and it’s when most of the state’s high schools begin their seasons after weeks of practices and scrimmages. 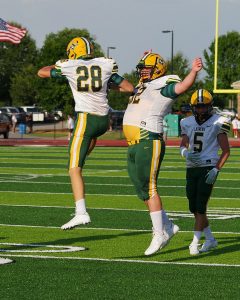 Clinton, ranked No. 6 in Class 3A, hosts Batesburg-Leesville Friday night at Wilder Stadium, while Laurens travels to Hillcrest, ranked No. 5 in Class 5A. Kickoffs for both season-opening games are scheduled for 7:30 p.m.

The Raiders and Red Devils competed this past Friday in the Bill Pate White Rose Classic, a jamboree at York Comprehensive High School. Laurens was a 20-13 winner over Fort Mill, and Clinton edged host York 21-20.

Both Clinton and Laurens will be playing in newly aligned conferences in 2022.
The Red Devils shift to Region 4-3A along with Emerald, Union County, Chester and Woodruff.

But Week 0 means non-conference games, some intriguing matchups and sometimes the renewal of old rivalries and friendships.

First-year Batesburg-Leesville head coach Greg Lawson and Clinton head coach Cory Fountain will renew acquaintances when the Panthers visit Wilder Stadium.
Lawson and Fountain were on J.R. Boyd’s Laurens District High coaching staff together as assistants. Lawson in the early 2000s. Lawson went on to succeed Boyd as the Raiders’ head coach for seven seasons from 2007-13. Fountain became head coach at Lamar, where he once helped Boyd build a Class A powerhouse, before taking the Clinton top job in 2019. 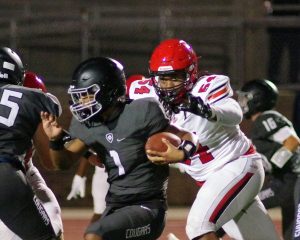 The Class 2A Panthers are coming off a 3-4 COVID-interrupted season, the last for former head coach Gary Adams, and Lawson said he wants to return Batesburg-Leesville to its storied history. The Panthers have won seven state titles and have appeared in 16 title games. Their last championship came in 2013, and their last finals appearance in 2016, a loss to Abbeville.

“I felt like they need to be Batesburg-Leesville again,” Lawson told The Lexington Chronicle. “Coming in and making an observation the first couple of weeks that I met them, I felt like we needed to go back to what Batesburg does and that’s run the football first.”

In the limited amount of scrimmage tape available to the Red Devils coaching staff, Fountain saw a commitment to do just that.

“They’re coming out in a Pro I(-formation) with twins (two receivers on the same side of the line),” he said.

Clinton’s potent running game led the Red Devils to the third round of the Class 3A playoffs last season where they lost to eventual state champion Daniel.

While the Panthers are expected to establish their rushing attack, Fountain said he knows his old friend and colleague won’t stop there.

“You have to take (Lawson’s) whole body of work,” Fountain said. “All we have on film from Batesburg is one scrimmage and a jamboree, so it’s a challenge to prepare. . . .

Knowing him from Laurens and other places, I know he’ll have some surprises for us. He always has a wrinkle or two up his sleeve.”

Clinton was a surprise to some last season, finishing just a step short of an Upper State championship game appearance.

But there will be no surprises this time around.

The Red Devils are returning 14 starters from last year’s 12-2 team, including region Defensive Player of the Year Bryson James at linebacker.

And Clinton knows a thing or two about establishing the running game. The Red Devils ran for more than 3,500 yards last year and averaged more than 40 points per game.
James, who doubled at running back, and Jyshun Copeland combined for over 1,500 yards and both are returning to the backfield.

Clinton is replacing three graduated offensive linemen, but Fountain said he is confident in their ability to pave the way again for the Red Devils’ running game. The offense will be triggered by Austin Copeland, who is a first-year starter had strong peformances in fill-in roles over the past two seasons. 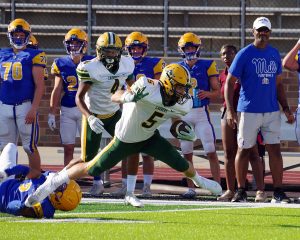 Laurens ended last season on a five-game winning streak and topped Easley in the opening round of the Class 4A playoffs before exiting against eventual state champion South Pointe.

With No. 5-ranked Hillcrest awaiting in the Week 0 season opener, the Raiders are hoping to recapture a little bit of that 2021 momentum.

“It’s a typical Hillcrest team,” said Laurens head coach Daryl Smith. “They’re going to be very fast. They’ve got a quarterback who’s going to be a college football player, and they have some dynamic receivers.”

The Rams finished 8-3 a year ago, and all three losses came by less than a touchdown.
Quarterback Bennett Judy was Region 1-5A Offensive Player of the Year after throwing for a state-leading 3,160 yards with 43 total touchdowns, also best in the state. The Rams return 85% of their total offensive production from last year.

The Raiders, who were 6-4 a year ago, also have a college prospect at quarterback in James Rawl. The senior has offers from Eastern Kentucky and Anderson, while his favorite target at reciever, Cayson Elledge, recently committed to Davidson.
Elledge and Rawl are among 13 returning starters on the roster for the Raiders.

“Our strength right now is our quarterback and our wide receivers with the experience they have, and on defense, it’s our linebackers,” Smith said.

The linebacking corps is led by senior Gemire Darden, a two-time all-region performer who led the Raiders in tackles last season.

The receiving corps will look to fill the void left by speedster Jayden McGowan, who signed last fall with Vanderbilt and enrolled there in January.

Elledge was Rawl’s favorite target last season along with Jay Pulley. Pulley is recovering from offseason shoulder surgery, but is expected to return to the lineup soon.

After the opener at Hillcrest, the Raiders travel to intra-county rival Clinton and then host Chapman, another Class 3A power of late.

Smith will try to solidify the Raiders’ offensive line and find a spark for the running game, which is without its top two rushers from a year ago in Zy Todd (Limestone) and Tye Roberson (Carson-Newman).

Smith said the running game will largely be by a committee of unproven backs behind Darden, who will see double duty. Noah Mosley, who is nursing a preseason injury, Javaye Suber and Jireh Brown are expected to contribute.

The running game sputtered early on at York this past week, but Smith said that can be fixed.

“I think we had some missed assignments, but that’s correctable,” he said. “It was good to see them out there with the pressure on a little bit.”