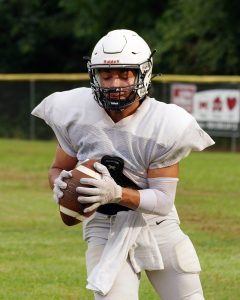 Laurens Academy heads into the great unknown this Friday night as the Crusaders see their first action of the 2022 season against the home-schooled Augusta Eagles.

LA has a new head coach in Travis Plowden, who is also the school’s athletic director and varsity boys basketball coach. Plowden takes over for Todd Kirk, who resigned as varsity coach to focus on his duties as the school’s headmaster and will coach LA’s middle school team.
During an eventful summer, LA hired Stacy Bell, a veteran defensive coordinator and a former head coach in the SCISA 8-man game with Palmetto Christian. Bell resigned about a month after he was hired in June without coaching a game at LA.
The Crusaders return a handful of players from last year’s 2-9 squad and welcomed former LA player Luke Tollison as offensive coordinator.
With new coaches, unproven players and a largely unknown opponent, Week 1 is a mystery for LA. Kickoff against the Eagles is set for 7 p.m.
“We’re going to go into this pretty blind,” Plowden said. “This game is going to be all about how we respond and what we can do. I’ve told the kids that we’re going to be adjusting on the fly, and we have to be able to do that.”
Senior running back Clarence Bertoli returns after missing a chunk of last season due to a knee injury. He has been hampered by a balky hamstring during preseason practices, but is expected to play against the Eagles.
After playing last season with a slim roster, even by 8-man standards, the Crusaders currently have 15 players on their roster to give them needed depth.
Bertoli, lineman Daniel Ervin and quarterback Andrew Codington are the only seniors on the roster, and Codington is making his varsity debut.
All of the players blocking for Bertoli and Codington are freshmen and sophomores, and all of them will see two-way duty on the defensive line.
Plowden said he is hoping the Crusaders won’t be inexperienced for very long.
“We’re going to have moments coming up that are very hard and very intense, and I’m excited to see how we respond to it,” he said. “How we respond is going to be key.”
Plowden also said his young team has responded so far in practice, but he knows things will be at a new level when the lights come on Friday night at Todd Kirk Field.
“I’ve appreciated how hard our kids have worked,” Plowden said. “They’ve done a good job of playing through some adversity already. We’ve coached them up hard, and I’ve seen them respond to it well.”
LA will play five home games this season.
Here is the complete schedule:
Aug. 19: Augusta Eagles; Aug. 26: at Richard Winn; Sept. 2 Newberry Academy; Sept. 9 at Oakbrook Prep; Sept. 16: Wardlaw; Sept. 23: Jefferson Davis; Sept. 30: at Faith Christian; Oct. 14: at W.W. King; Oct. 21: at Newberry Academy; Oct. 28: Richard Winn.
Here is this year’s LA varsity football roster:
Laurens Academy Crusaders
QB/DB Andrew Codington, Sr.
TE/DE Jared Willard, So.
RB/CB Clarence Bertoli, Sr.
WR/LB Nathan Bell, Fr.
WR/DB Buddy Baker, Jr.
WR/LB Garrett Murphy, So.
WR/DB Brenton DeYoung, So.
OL/DL Zeke Charping, Fr.
OL/DL Dylan Frey, So.
OL/DL Dawson Sherman, So.
OL/DL Hack Hardy, So.
OL/DE Garrison Vaughan, Fr.
OL/DL Anthony Candeles, So.
TE/LB Tristan Bates, So.
OL/DE Daniel Ervin, Sr.
Posted in Breaking News, Sports