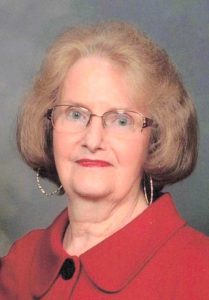 Born in Toccoa, GA, she was a daughter of the late Rev. C. H. Sutherland and Aileen Keel Sutherland. Phyllis worked alongside her husband at Professional Drug Store for many years. She was a graduate of Boiling Springs High School, attended North Greenville Junior College, Anderson Jr. College and graduated from Furman University.

Phyllis was a devoted wife, mother, grandmother, Christian and humble daughter of God the Father. She was a member of First Baptist Church of Laurens. As a devoted Christian, she served in many capacities: mission director, Sunday School teacher, numerous committees, and taught all ages including residents at Martha Franks Retirement Community.

In addition to her parents, she was predeceased by a sister, Rosemary Sutherland and a grandson, Gregory Chandler Metz.

A funeral service will be held 3:00 PM Friday, June 3, 2022, at The Kennedy Mortuary Chapel, conducted by Rev. Tommy Cox and Rev. Adair Rogers, with visitation one hour prior to the service. Burial will be at Westview Memorial Park immediately following the funeral service.