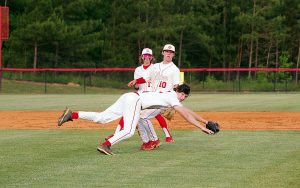 Clinton pitcher Wil Stewart (12) falls after making an off-balance throw for an out at first base Monday against Powdersville as infielders Zane McLendon (10) and Zack Fortman look on.

A late-evening sun aided a late-inning rally as the Patriots escaped Clinton.

The Red Devils took a 1-0 lead in the fourth inning when Wilson Wages singled, stole second and third and then scored on a catcher error.

But that was all of the offense the Red Devils could muster.

The Patriots got back-to-back doubles in the sixth — both of them on fly balls to left field, which were misplayed as left fielder Davidson Pitts stared into a glaring setting sun.

On Thursday in Powdersville, the Red Devils scored 18 runs in a seven-run victory over the Patriots.

Powdersville advances to play Chapman for the Upper State championship and will have to defeat the Panthers twice on Wednesday in Inman.
The Red Devils end their season with a 25-5 record. 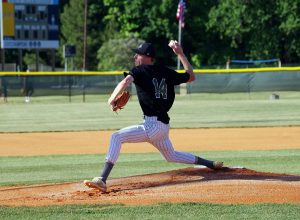 TAYLORS — The Eagles got all the runs they needed with a five-run third inning that put the Raiders away.

Eastside starter Garrett Dehlinger gave up 10 hits in the complete-game win, striking out six and walking one.

The Eagles were helped by three Raiders errors that led to three unearned runs.
Senior Jackson Edwards went the distance for LDHS, giving up seven hits over six innings, striking out three and walking two.

The Raiders got single runs in the third, fifth and sixth innings, but were unable to come up with the big offensive inning they needed after the Eagles led 8-1 after three innings.

Mason Hamby, Jackson Martin, Coleman Coker and Jack Yarbrough recorded two hits apiece for the Raiders with Coker, Hamby and Yarbrough each hitting a double.
Eastside will play A.C. Flora for the Upper State championship Wednesday and must defeat the Falcons twice.

LDHS, which began the Class 4A playoffs as the No. 3 seed from Region 2-4A, finished the season with a 16-15 overall record.