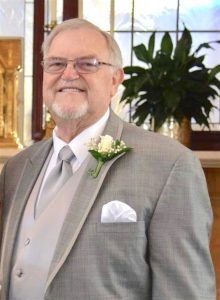 Robert Harrison Byers Jr. (Bob), 74, of 111 Maplebrook Street, Laurens, went home to be with Jesus on Sunday, March 13, 2022, after a hard-fought battle with heart and kidney disease, having passed in the home he shared with his wife of 52 years, Christine M. Byers.

Born in Rock Hill, Bob was the son of the late Robert Harrison Byers Sr., and the late Dorothy Haire Byers. Bob was a graduate of Rock Hill High School, was a lifelong automotive salesman/general manager, and a fanatical Gamecock fan.

In addition to his wife, Bob is survived by his children, Dale (Sally) of Laurens, Tim (Sandy) of Joanna, Lori Aultman (Lee) of Waterloo, and Julie Alexander (Greg) of Gulf Shores, Ala., and Robert, also of Laurens. Bob was so proud of his family which also included, 11 grandchildren, nine great-grandchildren, as well as many other loved family members.

Bob was also predeceased by a sister, Claudette Ferrell; a daughter, Dorothy Byers Morgan; and a grandson, Hunter Byers.

Also in addition to his large family, Bob leaves behind many dear friends in Rock Hill where he grew up, and many of the friends he made after having moved to Laurens. Thanks to all who shared Bob’s life, as he cherished his friends and family.

Bob also greatly loved his Rosemont Baptist Church family, where he served as Deacon and sang in the Choir. His church family was as dear to Bob as were his family and friends.

A memorial service celebrating Bob’s life will be held on Saturday, March 19, at 2 p.m., at Rosemont Baptist Church in Waterloo. A gathering of friends and family will be from 1-2 p.m., with the service to follow.

In lieu of flowers, memorials may be made to the Children’s Department, Rosemont Baptist Church, or to a charity of one’s choice.