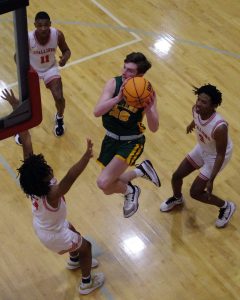 Meanwhile, Laurens District High School was sent packing in the second round of the Class 4A tournament by defending state champion South Pointe.

South Pointe took a step toward defending its Class 4A state title with an lopsided win over the visiting Raiders Saturday.

The two teams battled evenly through the first quarter, but that gave way to a disastrous second for the Raiders, who were never able to solve the Stallions’ full-court pressure defense.

After scoring the final bucket to take a 13-11 lead at the end of the first quarter, South Pointe scored 19 more unanswered points over the course of the second quarter until Preston Mahon finally got the Raiders back on the scoreboard with a basket just before halftime, but by that point the Stallions had built a 32-13 lead.

“Their press bothered — the physicality of their press,” said LDHS head coach Tommy Spires. “Being short on guards I knew was going to be an issue. . . . They’re defending state champions for a reason.”

LDHS committed 22 of its 36 turnovers in the first half with the bulk of those coming in the second quarter as the South Pointe pressure defense took over the game. With Tyquavis Johnson sidelined with an injury, the Raiders played with a depleted backcourt.

Mahon led LDHS with 7 points, and Mason Aiken added 6. Senior Isaiah Burnside was one of three players with 4 points each along with Pe’rel Shands and Blake Nelson. Burnside added 8 blocked shots.

The Raiders end their season – their first under Spires as head coach – with an 11-15 record.

The Crusaders survived and advanced on Saturday against Conway Christian at the Sumter Civic Center.

The opening-round game in the SCISA Class A playoffs was close throughout with LA maintaining the narrow lead it had held for most of the game in the fourth quarter.

Though the Crusaders were unable to pull away, they hit key free throws down the stretch, hitting 9 of 12 attempts from the foul line in the final period and 11 of 14 for the game.

“We kept the lead and shot a lot of free throws in the fourth,” said LA head coach Travis Plowden. “(Andrew) Codington and Cal (Robertson) were very clutch.”

Codington hit 7 of 8 free-throw attempts and scored 9 of his 12 points in the fourth quarter. Robertson hit a pair of key free throws in the final minutes.