• Investigation launched into students’ behavior prior to lacrosse vs. Howard 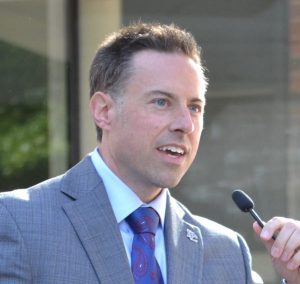 Presbyterian College President Matthew vandenBerg released a statement Tuesday after the college announced it is launching an investigation into an incident that occurred prior to a women’s lacrosse game against Howard Friday at Bailey Memorial Stadium.

According to reports, players from visiting Howard University were met with taunts and abusive language that included racial and sexist comments from a group of white male students outside of the stadium.

In an open letter, vandenBerg condemned the incident as did PC Provost and Vice President for Academic Affairs Kerry Pannell and Will Harris, chairperson of the Diversity and Inclusion Advisory Council, in an earlier letter.

“The racist, misogynistic, and hateful behaviors exhibited by individuals on the day in question are an abomination,” vandenBerg wrote. “They have no place anywhere in civilized society, let alone at PC. Numerous students, faculty, staff, and alumni have contacted me to express their outrage, utter embarrassment, and disbelief that such behavior can even happen today on our campus. I concur. PC resolutely and unequivocally condemns all forms of racism, misogyny, hatred, and discrimination. We value and respect the dignity and self-worth of all individuals.

“We also must remember that the actions of a few reflect on the campus as a whole. The fact that some of our students felt sufficiently comfortable, privileged, and empowered to undertake such deplorable and hateful actions is a clear sign of the significant work we must all do to continue building a more equitable and inclusive campus for all community members and visitors.”

In addition to a student conduct investigation that is already under way, vandenBerg said PC has “engaged independent counsel to conduct an investigation to ensure the most efficient, thorough, and accurate gathering of facts and documentation of findings. We are committed to an expeditious, thorough, and fair process and to severe consequences for individuals found responsible.”

PC has also closed down gathering spots outside of fan seating for athletic events, including “Hoseville,” the hill outside of Bailey Memorial Stadium.

“We apologize to the Howard University women’s lacrosse coach and her players, and we deeply regret the experience they had on our campus,” Clakely’s Tweet read.

In an article published Sunday on InsideLacrosse.com, Terry Foy quoted Healy-Scott said the tone of the PC students was threatening and vulgar.

“They started talking about their guns, and their scopes, and their gauges,” Healy-Silcott told Foy. “As their coach, I had to decide ‘Am I going to have to go over there and handle this? They’re going to get worse. Or am I going to leave my girls alone to get in their own heads — because they had a game to prepare for?’ I very much felt torn with what to do. I brought my kids in, talked to them about clearing out everything, I said it was something we’re going to deal with after the game, I was not going to let it go, but I needed them to focus. I’m so proud of my girls for what they did, what they endured, what they handled. It was vulgar‚ very vulgar — threatening. It is the worst experience I’ve ever had with this type of thing at any game in my entire career.”

Healy-Silcott also described PC’s players and coaches as “mortified and embarrassed” at the pregame incidents and the game, a 16-6 PC victory, as competitive and cordial.

But vandenBerg said the ripples of the incident are being felt by those at Howard and PC.

“Our hearts hurt for our visitors from Howard University,” he said. “They also hurt for women and people of color in the PC community, many of whom have told me they feel less safe on their own campus because of the actions of select students. We, as a community, stand with them and are committed to their safety and ability to flourish.”

Marc Riccio, president and CEO of USA Lacrosse, described the incident as “infuriating.” He released a statement on Sunday as well.

“At a time when we’re recognizing the amazing contributions of the Black community, it’s saddening to think there is still much work to be done,” Riccio said. “We want to offer our full support to the players, coaches and staff of Howard University. USA Lacrosse remains committed to fostering a national lacrosse community that encourages understanding, appreciation and acceptance of all.”

vandenBerg expressed similar sentiments as he said PC must hold itself accountable.

“While it is proper and right to express outrage and to apologize for wrongdoing, we will not confuse apologies with action, accountability, and meaningful progress toward living our values,” he said.