Clinton, S.C. – After learning last month that the long-planned recreation complex had a revised cost-to-build estimate of about $46 million, members of Clinton City Council on Monday evening expressed concern that the city will need to make decisions about what it can and will do now.
Clinton business owner Joseph Dyches and resident Walter Hughes both went before council to explain that the residents of Clinton needed to be a larger part of the planning process, and Dyches asked council to pause decisions on the project until a full-time city manager and city financial director could be hired.
Dyches told council that 35 residents attended an open community meeting last week and he presented their questions about how the first $3 million has been spent thus far and if a market analysis of the project had ever been completed before the engineers were hired and grading work begun.
“We recommend a pause until the city hired a city manager and a finance director,” Dyches said. “What are the maintenance costs and can we afford them? Was there a marketing study done and what were those results?”
Walter Hughes, owner of Sadler-Hughes Apothecary, said he’d like to see a frank discussion of the city’s plans for the rec complex and how they plan to get there. 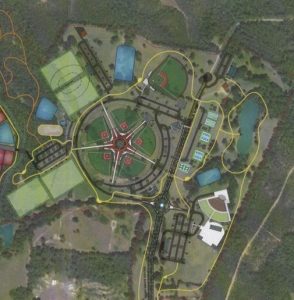 Interim City Manager Rebecca Vance suggested that council set a date where city residents could engage city council members as well as the engineers from W.K. Dickson and she suggested that happen soon, such as late February or early March.
While Vance suggested using the community building, which is owned by the city, and allowing several hours for people to come by to ask questions and give their input, Mayor Bob McLean suggested that people could go out to the site of the rec complex to ask questions so they could see the location and scope of the project.
“Maybe change the location. We have a really nice barn building out there on the site. You could open that up and have it out there on site. I think it’s important to see the site too and see what we’ve done and they can visualize what the plan was and they can visualize it for themselves,” McLean said. He added that it wouldn’t be a problem getting cars down there but Vance wasn’t convinced the rec site would be suitable and council was told they would be contacted for suggested times.
“This thing has been going on for three years,” said Council Member Ronnie Roth. “It started out at $7 million and now it’s $46 million. I think we are in a position right now where we need a reaffirmation if council is still dedicated to a recreation complex. I am dedicated to it but I want to make sure we are unified and what we’re going to do about it.”

Former City Manager Bill Ed Cannon had estimated the complex at $4.5 million at the time of the groundbreaking in Sept. 2020, then told council in Dec. 2020 the estimates were closer to  $7 million. At that time, under  Cannon’s suggestion, the original plans had been developed by an engineering firm from Kentucky. Cannon abruptly left his post in January, 2021.

Other council members also explained they still want to see a rec complex in some form, but the cost made the options difficult.
“Not everybody is going to play softball and not everyone is going to use walking trails,” McLean said, “but I think outdoor recreation is vital to the community.”
“I think the definition of recreation is defined by the individual or group of individuals, so our minds have to be very open to what is the recreation complex that we need in the City of Clinton now,” said Council Member Danny Cook. “But we need to understand what it costs to build and what it costs to maintain it, and how we market that complex and how we secure that complex. I have a lot of questions and could not begin to prioritize them because these answers are very much needed. It’s got to be a community buy-in of who is going to use it.”
Council member Robbie Neal said the master plan is the result of the people of Clinton telling council what it wanted in the complex. It included all of the requests, she said, and she joked that the city would take donations “if anyone wants to put their name on a bench or something.”
Council member Megan Walsh said she was glad for the master plan.
“It finally gives us a road map for how to proceed and how to eliminate things that will not be possibilities,” Walsh said. “Up until that time everything was speculation.”

This story was published on page 1 of the Wednesday, Feb. 9 issue of The Laurens County Advertiser.