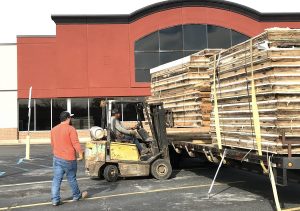 on the Western side of Laurens will have to wait a bit longer to learn when a grocer will be moving into the former BI-LO. Demo contractors have recently been removing equipment, shelving and refrigeration units from the interior of the former store on Hwy. 76 west of Laurens, and some of the equipment was in the parking area this week.
On Monday afternoon contractors were loading large pallets from dismantled freezer units on a delivery truck bound for Hollywood, Florida. They did not want to be identified but explained they were not working for a grocery chain.
The BI-LO store in the Western Plaza Shopping Center was part of a wave of closures resulting from the bankruptcy filing announced in 2020 of the chain owned by Southeastern Grocers.
More than 60 BI-LO stores closed in Georgia and the Carolinas, but Food Lion moved in to take over dozens of them, including the Clinton location. The Laurens store closed its doors in 2021. 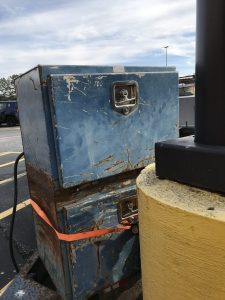 Lately, however, there’s been plenty of speculation that Food Lion would also be taking over the Laurens store, but currently the company denies that.
“While we routinely evaluate locations, we have no plans to open a store in this location at this time,” said Matt Harakel in an email on Tuesday, Feb. 1. Harakel is the manager of external communications with Food Lion.
The Salisbury, North Carolina, based company had also expressed no interest in the Laurens location prior to its closing early last year.
On Monday, a hired contractor who did not want to be identified said he thinks even if one of the grocery chains decided to move into the storefront, it would be no time soon due to the time and expense of replacing all the equipment and materials which have already been removed.

This story first published on page 1 of the Wednesday, Feb. 2 issue of The Laurens County Advertiser.