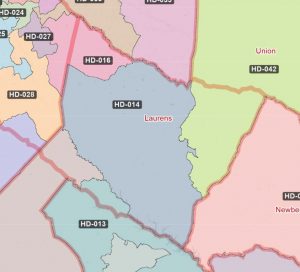 While the Upstate has shown tremendous growth over the last decade, Laurens County has not shown as much as surrounding counties and could have lost a seat in the redistricting. However, with the addition of two more Upstate representatives taking small portions of the county, Willis said it actually gives the county a stronger voice in Columbia.

“It still looks good for Laurens County because there have been three House members representing Laurens County and now there will be five,” Willis said, noting that the county still has a resident House member in District 14 Rep. Stewart Jones who lives in Laurens.

The restructuring was done by the House Judiciary Committee with assistance from attorneys who worked with them to develop the plan. House members were allowed to come have a meeting with the committee to give input, Willis said.

The updated mapping is essential because each House seat needs about the same number of constituents. The census shows growth trends throughout the state but each House district must keep similar numbers of residents, regardless of density.

For rural counties like Abbeville, Laurens and Union, a district may be larger geographically but have fewer residents. The new map takes areas of denser population near the outer areas of the county, such as the northern area above Greenpond, and shifts it within Willis’ District 16. Additionally, if approved by the state senate, the area around Lake Greenwood will be put under District 13 Rep. John McCravy.

Union County’s District 42 Rep. Doug Gilliam, who has held a very slim portion of Joanna and half of Clinton, will now have most of Clinton and the entire eastern corner of the county, while the Princeton area which borders Abbeville County will fall under District 11 Rep. Craig Gagnon.

The remaining and geographically largest section of central Laurens County will be under Jones.

The redistricting takes months because it’s important for each district to have about the same numbers of constituents, Willis said.

The ideal population for a House member is 41,278, and under the new map Jones has 40,858. Willis has the smaller but higher populated northern section of Laurens County that, combined with Fountain Inn, has 41,781 residents.

With the addition of the rest of Clinton Gilliam now has a total of 40,433, including Union County. Gagnon has all of Abbeville County and the small portion of western Laurens County for 40,357. McCravey’s District 13 population now totals 40,433 with the populous region of Laurens County near the lake and a portion of Greenwood County.

Published Page 1 in the Wednesday, Dec. 8 issue of The Laurens County Advertiser.