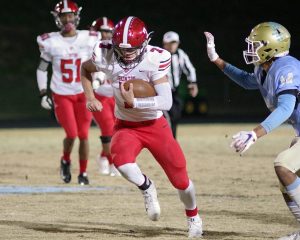 Clinton QB Davis Wilson rumbles for a first down in the third quarter Friday of the Red Devils’ playoff loss at Daniel.

Whatever magic Clinton had conjured during a single-loss regular season and through the first two weeks of the Class 3A playoffs had no effect Friday night on Daniel.

The defending state champion Lions scored four touchdowns of at least 40 yards, including three passes from Trent Pearman to Eli Merck, in a 52-7 win, eliminating the Red Devils from the playoffs.

Pearman connected with Musin Kelley on a 77-yard touchdown strike on the game’s second play from scrimmage – a play that proved to be a harbinger of things to come for Clinton. Pearman found Merck on touchdown passes of 46 and 55 yards before the first quarter ended as the Lions jumped out to a 21-0 lead, which they grew to 35-0 by halftime.

Clinton head coach Corey Fountain told his players after the lopsided loss that this game does not define them or the 2021 season. The Red Devils ended their season with an 11-2 record, losing to Daniel and 27-26 to Chapman during the regular season.

“This is a measuring stick for our guys,” Fountain said. “(Daniel) is the defending state champion, and we’ve got to go back to work.”

Pearman completed 14 of 20 passes for 294 yards before Daniel head coach and Presbyterian College alum Jeff Fruster pulled most of his starters with a 49-0 lead in the third quarter. Merck finished with six receptions for 169 yards and the three scores. 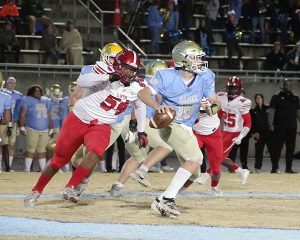 The Lions defense stifled Clinton’s vaunted rushing attack, holding the Red Devils to a season-low 88 yards on the ground and 159 yards in total offense.

Clinton senior quarterback Davis Wilson completed 3 of 18 passes for 71 yards, but one of those completions was to Wilson Wages from 16 yards out with four minutes, 44 seconds left in the game for the game’s final score – a touchdown that finally got the Red Devils on the scoreboard.

Daniel (12-0) advances to the Upper State Championship game (state semifinals) next Friday where the Lions will face Chester, a 35-18 winner over Powdersville (11-2). The Cyclones (7-2) have scored upset wins over Chapman and Powdersville over the past two weeks.