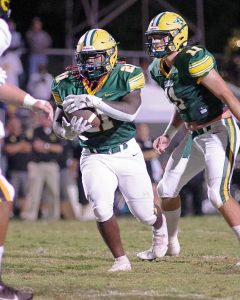 RB/LB Gemire Darden (21) and the Raiders are set to return to action after two weeks this Friday night at Eastside.

Laurens got back to practice at near full force Monday. Now, the Raiders just have to make it to Friday night.

With a trip to Region 2-4A opponent Eastside set for Friday night, LDHS head coach Daryl Smith said the Raiders hit the practice field Monday with all but three players in attendance.

“Last week was a long week,” he said. “We had a good day back (Monday). There was some excitement out there at practice. It was kind of like a first practice of the season, so they were glad to be back, and it was good to see that energy with everybody.”

LDHS practice as much as it could last week, but did so with around 25 players  – a little more than half of the roster.

The Raiders will only play two region games, but Smith said he believes they can still make the playoffs as one of four Region 2-4A teams to make the field. He said wins over Greer and Eastside could put his team in position for at least the No. 2 seed and a home playoff game.

The Eagles (1-6, 0-1) have struggled to score in all but one game this season. In their six losses, the Eagles have scored just 17 points. Their lone win was a 31-28 victory over Wade Hampton on Sept. 3.

“They’ve had a lot of lopsided losses, but they’ve got some good guys up front, especially on the defensive line,” Smith said. “So, I don’t think they’re as bad as some of the scores have been.”

But Smith said the Raiders’ biggest challenges heading into Friday night are refocusing and recapturing the energy they exhibited in a win at North Augusta before COVID-19 struck the roster hard.

In other games scheduled for Friday night: Class 3A No. 3 Clinton hosts No. 5 Chapman, Ware Shoals is at McCormick and Laurens Academy is at W.W. King Academy.

The Red Devils girls tennis team improved to 6-0 this season with a 7-0 win over Emerald Monday.

The Vikings forfeited three matches, but Clinton did not drop a single game in singles as Mary Catherine Dailey, Chandler Dailey and Gracie Spangler all won by scores of 6-0, 6-0 at the top of the singles ladder. Gracie Wiggins and Libby Dailey won 6-1, 6-2 and No. 2 doubles.

The win was the start of a busy week for the Red Devils, who will also host Woodruff Wednesday and have matches at Chapman Thursday and at home against the Panthers on Friday that are expected to decide the Region 3-3A championship. 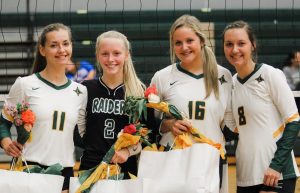 With the win, the Hornets locked down one of the region’s four playoff berths.

It was Ware Shoals’ second win of the season over the Blue Flashes.

Sophomore running back Justice Lomax led the Hornets with 86 yards on 14 rushes and a touchdown. Freshman quarterback Dalton Boyter, who connected with Tyler Conklin on a 40-yard touchdown pass, added 65 yards on the ground and Jaylen Coats had eight carries for 60 yards.