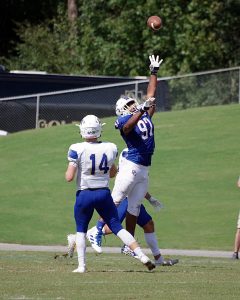 Presbyterian DE David Kinard (97) tries to knock down a pass by Morehead St. QB Mark Pappas Saturday during the Eagles’ 38-30 win over the Blue Hose.

A slow start Saturday afternoon against Morehead State doomed Presbyterian to his third straight loss as the Eagles escaped Bailey Memorial Stadium with a 38-30 victory.

PC spotted the Eagles a 17-0 first-quarter lead and were never able to fully recover despite a late fourth-quarter scored that cut a once comfortable Morehead State lead to a single score with just over a minute to play in the game.

The 38 points given up by the Blue Hose defense were the fewest scored by an opponent in PC’s three losses this season. Campbell scored 72 points in a 72-0 victory three weeks ago, and Dayton scored 63 points two weeks ago.

“If you told me they’d score 38 today, I’ll take it,” Kelley said. “Especially since we gave them a couple of short fields. . . . In the end, our defense played well enough for us to win, and on offense I didn’t do a good enough job on offense to give us a chance to win.”

Issiah Aguero ran for 113 yards and two touchdowns – 1-yard runs in the first and fourth quarters – as Morehead State avenged a loss at Bailey Stadium during the Pioneer Football League’s spring season, which came about after COVID-19 forced the cancellation of the 2020 fall season.

Quarterback Mark Pappas also threw for 313 yards on 26 of 46 passing with an interception and a pair of touchdowns for the Eagles (3-2 overall, 0-2 PFL).

Freshman wideout Jalyn Witcher caught two of Hefley’s touchdowns, scoring from 17 and 92 yards out. The two scores gave Witcher eight touchdowns on the season, tying a PC Division I-era record. He finished with 12 catches for a game-high 178 yards.

Redshirt sophomore Mack Simmons caught a Hefley pass with 1:07 left in the game and took it in for a PC touchdown to cut Morehead State’s lead to 38-30.

PC recovered the ensuing onside kick, but were flagged for illegal touching, allowing the Eagles to run out the clock.

The Blue Hose (2-3, 0-2) travel to Davidson next Saturday to play in what is expected to be deemed a “Carolina Border Clash” rivalry game as two of the PFL teams geographically closest to one another in the conference. 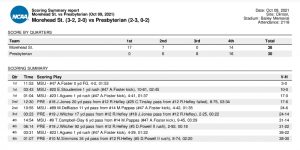