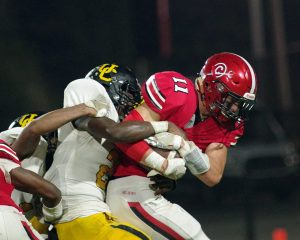 Wilson Wages (11) fights for yardage following a reception that set up a touchdown in Friday night’s 56-21 Region 3-3A win over Union County at Wilder Stadium.

Clinton, ranked No. 3 in Class 3A, made a statement in its first Region 3-3A contest Friday night, defeating Union County 56-21 at Wilder Stadium.

The Red Devils (6-0 overall, 1-0 region) got three first-half touchdown runs from Bryson James, jumping out to a 21-0 first-quarter lead and sailing to their first win over the Yellowjackets since 2014.

James scored on runs of 12, 32 and 2 yards and led the Red Devils in rushing with 62 yards on seven carries as balanced Clinton rolled up 246 yards on the ground. Jishun Copeland and Jykorie Gary each added 1-yard touchdown runs for the Red Devils as part of their first-quarter surge.

By the time Union County receiver-defensive back Kevon Hughes intercepted a Davis Wilson pass to set up his own 66-yard touchdown reception from Ben Black with less than a minute left in the third quarter, Clinton had an insurmountable 34-14 lead. Hughes turned in a game-high 152 yards on six catches.

The Red Devils rolled up 443 yards of total offense, including 187 yards passing from Wilson on 5 of 7 attempts. Wilson Wages led Clinton receivers with three catches for 116 yards, setting up scores with a pair of long receptions.

The Yellowjackets (0-4, 0-1) remained winless on the season despite 433 yards of total offense and a game-high 103 yards rushing from Cam Owens.

Clinton was also a perfect 5-for-5 on third-down conversion attempts.

In the waning seconds of the third quarter, sophomore running back Jayden Robinson scored on a 4-yard run to finish off a three-play, 55-yard drive that he started himself with a 34-yard run.

Clinton’s Tailek Fuller added a 90-yard interception return for a score with 10 minutes 34 seconds to play. Jishun Copeland capped Clinton’s scoring with his second 1-yard plunge of the night with 2:48 left in the game.