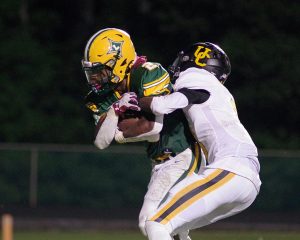 Laurens’ Tye Roberson drags a defender toward the end zone during the Raiders’ 44-28 win over Union County Friday night at K.C. Hanna Stadium.

In a game that almost wasn’t, Laurens broke into the win column Friday night against visiting Union County, topping the Yellowjackets 44-28 behind a potent ground game led by Tye Roberson’s career-high 174 rushing yards.

In addition to Roberson’s performance, which included a fourth-quarter touchdown run that put the game out of reach, Gemire Darden and Zy Todd scored two rushing touchdowns apiece as the Raiders (1-2) rolled up 334 yards on the ground and 434 yards of total offense.

The game came perilously close to being canceled due to COVID-19-related quarantines within the Raiders program. LDHS was missing four starters on its offensive line and three cornerbacks.

“If we had had one more quarantine, we had decided we were going to have to cancel,” said LDHS head coach Daryl Smith, whose roster was down to 30 players, including at least one call up from the junior varsity team. Union County was playing its first game of the season after canceling its first two games due to COVID-19 positive tests within the program.

LDHS took a 27-21 halftime lead after James Rawl connected with Jay Pulley on a 15-yard touchdown pass with 24 seconds left in the second quarter. Rawl connected on 7 of 12 passes for 74 yards and ran for another 85 yards. His touchdown pass to Pulley came one play after Rawl had to leave the game after taking a painful hit to a knee.

The Yellowjackets (0-1) got their only score of the second half in the third quarter, but the Raiders responded with 10 unanswered points to end the game, including Roberson’s touchdown and a 29-yard field goal from Roberto Luna that gave LDHS a 37-28 lead, putting the Raiders up by two scores.

Roberson followed Luna’s kick with his lone touchdown of the game. Todd ran for 73 yards. 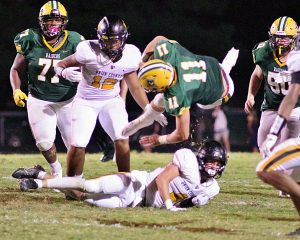 Laurens QB James Rawl is upended at the end of a first-down run Friday night against Union County. 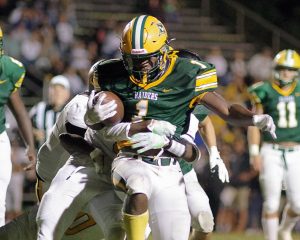