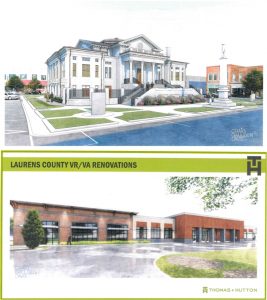 Renderings of proposed renovations to the HIstoric Laurens County Courthouse and the former Laurens Winn Dixie building that are to become county offices.

In addition to updated proposals on Phases 2 and 3 of the Courthouse renovation, council members were also to consider plans for the renovation of the former Winn Dixie Building off of Hillcrest Drive and the release of Capital Project Sales Tax (CPST) funds to cover a portion of a $1.25 million project at the Laurens County Airport that would expand the terminal.

John Hansen, of Greenville-based Craig Gaulden Davis Architecture, presented plans for the courthouse renovation recently to the county’s appointed advisory committee, and its members recommended a design proposal that was presented to council Tuesday night.

The base bid as presented to council for design and development of the renovation was almost $2.5 million and is to be covered by the CPST.

“The base scope of Phase II includes the replacement of the four 1972 additions located between the 1838 courthouse and the 1911 wins with new recessed connectors restoring the façade to its historic appearance,” the proposal read. “The base bid also includes the exterior building envelope repars and restoration as well as the roofing replacement and repairs not completed during Phase I.”

Phase I was paid for with historic preservation grants and a bond issue from the county. It included repairs and stabilization after years of wear and weather-related damage, which included water leaks and mold issues.

Dale Satterfield, interim county administration, said the proposal checked a lot of boxes for the committee.

“The committee really liked it, and the biggest thing is that it can be a multi-use type of facility,” Satterfield said of the reimagined interior of the building. … It gives us use of the building for all segments of the county population.”

Committee Chair Amanda Munyan said the renovation will give the nearly 200-year-old courthouse a new life.

“It’s such a great backdrop for so many things, so I’m excited for the renovation and for the county,” she said.

The county purchased the former Winn Dixie building off of Hillcrest Drive in June for $760,000 with plans to move the County Voter Registration offices there while giving the Veterans’ Administration a temporary home while the Historic Courthouse is under renovation.

As presented by Thomas & Hutton, the planned remodel of the building will cost about $5.69 million.

Satterfield said after work is completed, the building could also at least temporarily house some emergency services offices, including 911 that is now located in the old Laurens County Library on South Harper Street.

That location is located in a flood plane and is adjacent to railroad tracks that sometimes carry hazardous material, meaning in case of spill or a flood, E911 would have to evacuate the building.

The Laurens County Airport Commission requested that council release $255,000 in CPST funds for the terminal design and engineering phase of airport improvements and expansions.

The overall project is to cost $1.25 million with the majority of those funds coming from Federal Aviation Administration grants.

The project includes a new 3,000-square-foot terminal to replace the existing 1,800-square-foot building  that has been in use since 1981.

In other action Tuesday night, council members were expected to vote to accept a matching grant for the Gray Court Area Fire Department.

The $140,000 Assistance to Firefighters Grant (AFG) will be afforded to the Gray Court department to purchase air packs known as self-contained breathing apparatus (SCBA). The county will be responsible for $7,000 in matching funds.