This story was on page 1 and page 3 of the Aug. 1 issue of the Laurens County Advertiser 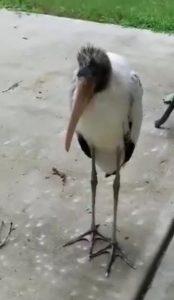 young wood stork showed up peering into a patio door of a Simpsonville home recently, the home owners knew the bird was out of place, and soon it was safe in the PAWS Animal Wildlife Sanctuary, Inc. a wildlife rehab facility outside Laurens.

“I’m the only federally licensed water fowl rehabber in the Upstate so they brought it to me, and the only way I had food for it was because I happened to have had donations from a salt- water fisherman in one of our two working freezers,” said PAWS owner Mercedes “Mac” Curry, referring to two tall garage-ready upright freezers which were provided by a donor from Pennsylvania. “We typically run on five freezers because we have meat-eating raptors and fish-eating water- fowl at any given time, and we never know what’s coming in next week.”

Like other non-profits, PAWS is happy whenever someone wants to make a donation, and they often have to take what they can get. 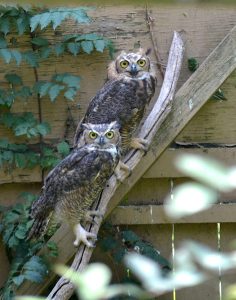 “This freezer was already fully rusted when someone donated it but at least it kept the meat frozen, but it’s not working anymore,” she said, motioning toward one of three ancient freezers which have been moved out of the shelter. “These large birds eat a lot and we can’t afford to turn down offers of fish and meat. I had to ask someone last week if there was any chance they could keep their meat donation frozen until we get our new freezers.”

Curry and some of her volun- teers who help feed the various animals each day have started a “Replace Ancient Freezers at PAWS” fundraiser on Facebook. She said they’ve gotten a little more than half of what they need to cover three freezers, so she hopes to soon order two of them and hope the rest will come in soon.

In the meantime, the young stork is regaining the weight it lost during the time it obviously was lost in the Upstate, and Curry is gaining counsel from a DNR stork specialist on the coast. The tall bird is eating two and a half pounds of fish a day right now and within a couple of weeks DNR officials will be able to relocate it to the coast. 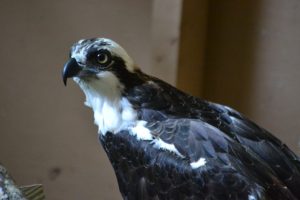 “We always need fish for the two ospreys and now the stork, and we have some really generous fisherman at Lake Greenwood,” Curry said. 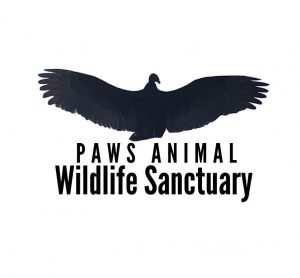 PAWS has been in Laurens County almost 20 years, and Curry was certified in wildlife rescue long before relocating to Laurens.

Anyone who would like to donate can do so on the Facebook page for PAWS Animal Wildlife Sanctuary or the “Replace Ancient Freezers at PAWS” page.