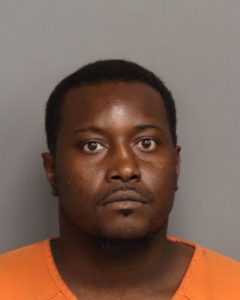 A suspect in a March shooting incident was returned to Clinton after being arrested this past week in York County.

Clinton Police had sought Gary Lee Jacks, 36, as a suspect in the shooting incident. Jacks has been charged with attempted murder in addition to possession of a weapon during the commission of a violent crime and illegal sale of a pistol.

Jacks was denied bond on all three charges.

According to Clinton Police, the shooting occurred at Oak Street Park in Clinton on the afternoon of March 10, and the victim, a 36-year-old black male, was dropped off at Prisma Health Laurens Hospital by two acquaintances driving a grey Chrysler 300 sedan.

The police report said the victim was observed speaking with another male in a red car at the El Cheapo gas station on Highway 76 before the two left in separate vehicles heading toward Oak Street.

CPD investigators were later able to speak with the victim and named Jacks as a suspect, issuing a warrant for his arrest. He had been a fugitive since that time.