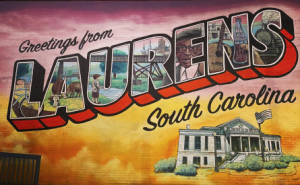 The award-winning ‘Pride of the Piedmont’ mural is the first such public arts project for Laurens but more are planned.

The vibrant design, the spectrum of pastels, the 1950s postcard design all had a purpose.

One of them was not necessarily winning statewide awards, but “Pride of the Piedmont” mural on Harper Street has done just that for Main Street Laurens.

The mural won the Outstanding Project Award from Main Street SC, giving Laurens its third statewide award for downtown revitalization this year. The Back Street Park project and Midtown Building renovation also have also been recognized by Main Street SC.

“That recognition really helps put Laurens on the map even more,” said Main Street Director Jonathan Irick. “People are seeing what’s happening in downtown Laurens, and they want to come see it for themselves.”

Laurens Mayor Nathan Senn said the latest award, especially when coupled with the others for historic preservation and excellence is “kind of a big deal.”

The “Pride of the Upstate” mural was created by Greenville artist Adam Schrimmer and now decorates what was once a gray wall easily visible by drivers traveling up Harper Street toward Fleming Street.

Schrimmer received input from local leaders on the design, but it is much more than bright colors.

A visual local history lesson is found inside the word Laurens highlighting blues musician Pink Anderson, the influence of rail and agriculture as well as Laurens Glassworks – once the city’s largest employer – and more.

“I think it’s also part of building bridges within the community,” Senn said. “It’s saying that we as a community recognize people like Pink Anderson being one of our favorite sons – and those are the things we’ve missed sometimes as we’ve told the story of Laurens.”

The award-winning mural was the first public-art project in Laurens since 2005, but it won’t be the last.

Irick said an announcement regarding a new mural is expected in the coming week, and he expects it to have more community input than the last. Meetings in 2020 were cut back due to COVID-19, so only community meeting was held concerning the project.

The next public arts project will build on the last, creating a visual arts trail for visitors and locals alike.

“We’re following the idea of the city’s master plan,” Irick said. “The second mural will be in the same general area. The idea in the master plan is to make it so people can walk around and take their social media photos and then post them.”

That is by design in the “Pride of the Piedmont” mural with a space along the bottom left of the “postcard” for people to pose for a photo.

“Every time someone takes a picture there and posts it on Instagram, that’s an ad for Laurens,” Senn said.