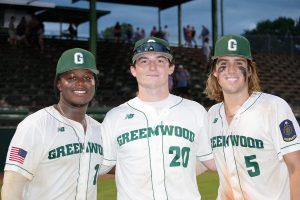 And Zach Faulkner, Zak Rice and Aidan Pridgen – all former Laurens District High standouts – all made it home, scoring on a calamity of pitching and defensive breakdowns by Easley. Post 20 went on to defeat Easley 11-1 on Monday and completed the two-game playoff sweep Tuesday with a 12-2 victory.

Post 20 has been scoring runs by the bunches during an nine-game winning streak that led them to a division title and a home playoff game, and the trio of former Raiders have been at the heart of that matter – and the Post 20 batting order.

“Those three guys are hitting right in the middle of the lineup for a reason,” said Post 20 head coach Nate Hamilton. “Compared to last year’s team, we were more of base-to-base, singles kind of team and maybe steal some bases, but this year we’ve got some pop.” 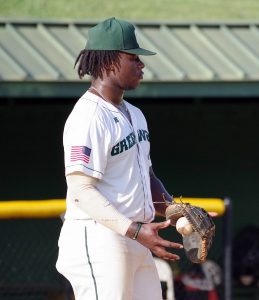 Faulkner and Rice were part of the Raiders’ Region 2-4A championship team this past spring, while Pridgen completed his freshman year at USC Lancaster, playing in eight games this past spring for the Lancers.

“You don’t get many opportunities to play with old teammates after high school and have that camaraderie you used to have,” said Rice, who is headed to Chattanooga State Community College to continue his playing career. “It’s really good to bring back Raider baseball, just in a different uniform.”

The shade of green used in the Greenwood Post 20 uniforms isn’t that different from LDHS, but the former Raiders are also suiting up with some former rivals from Greenwood High School, who battled with LDHS for the region championship until the final game of the regular season this past spring.

Faulkner, who will play at USC Union, said it’s all good.

“It’s been very cool,” Faulkner said. “Coming in here for the first practice of the season, I didn’t think it would be as cool as it was, but all these guys are really cool, and we really click. If we’d played our whole lives together, we’d be a pretty good team, so I’m excited to play with these guys and be as good as we are and continue forward.”

Faulkner hit second in the Post 20 lineup Monday in the first game of a three-game series to open up the American Legion state tournament. Rice hit in the cleanup spot and Pridgen hit fifth. As he did with the Raiders, Rice handled the catching duties with Faulkner at third base and Pridgen in right field. 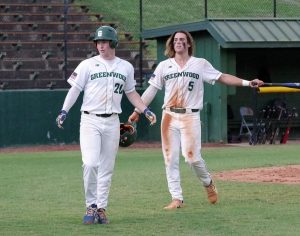 In a lot of ways, it seemed like old times, especially for Pridgen whose senior season was cut short after three games due to COVID-19.

“We played three games into my senior year,” Pridgen said. “I knew we were going to have something special that year, so to see it happen again with this team – with guys we didn’t get to play a lot with and new guys we’d never met before, it’s awesome.”

Pridgen’s hot bat has helped propel the Post 20 offense all season after limited action his freshman year with the Lancers.

The American Legion regular season is crammed into a month of nearly constant play, which gives players a small taste of what the college schedule of three or four games per week is like.

“I think the best thing about this team is that we come in ready to play, no matter who it is.”