Sulli Pinson’s sixth-inning home run to straightaway center that thudded loudly off the scoreboard was little more than exclamation point for the Laurens baseball team Monday night in a 12-4 playoff victory over Lugoff Elgin.

The home run was the second of the inning for LDHS and followed Jackson Martin’s solo shot, but the game had long been decided by that point thanks to a seven-run third spurred by four walks by two different Demon pitchers and key hits from Martin and Parker Wasson.

“We came out for batting practice, and every guy – one through 15 – was smoking the ball,” said LDHS head coach Tori Patterson. “I told the coaches that we were going to score some runs tonight.”

The victory kept the Raiders (18-8) in the winners’ bracket of the Class 4A district playoffs. LDHS is to play again on Friday and will face the Demons once again at 6 p.m. in a playoff rematch. LDHS will have to be beaten twice Friday in a potential doubleheader to be eliminated.

The Raiders made Patterson’s prediction about a prolific offensive night come true, but it wasn’t without its travails.

Will Morris parked a two-run shot over the left-field fence to give the Demons a 2-0 lead in the first inning.

“They came out and punched us in the mouth with two quick runs,” Patterson said. “But I was happy with the way my team bounced back.”

LDHS starter Zach Faulkner recovered to shut down Lugoff Elgin over the next four innings. Faulkner gave up six hits and three earned runs in five innings of work, walking two and striking out none.

It was more than enough to pick up the win as LDHS worked at the plate, forcing Demons starter Reed Goff from the game after 2 1/3 innings.

Goff gave up a lead-off single to Wasson and walked three of the next four batters he faced. All four scored as Thomas Willis reached on an error. Three of the Raiders seven runs in the inning were unearned thanks to the error.

After Goff, the Demons used six relief pitchers to finish out the game, but the control problems continued. 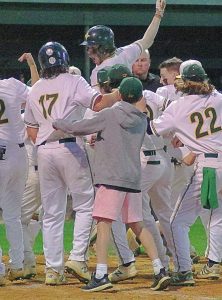 The Raiders pushed across two runs in the fourth after Mason Hamby and Zak Rice both were hit by pitches and Faulkner walked to load the bases. Austin McNuer followed with a two-out single to score Hamby and Rice and extend the Raiders’ lead to 9-2.

The victory over Lugoff Elgin, which followed a 4-1 win over Catawba Ridge Friday in the playoff opener for both teams, gives the Raiders a chance to rest its pitching staff prior to Friday’s potential doubleheader.

Against Catawba Ridge, Region 2-4A Pitcher of the Year Jackson Edwards picked up the win, allowing on an unearned run in 6 2/3 innings of work. Edwards struck out five and walked three in a two-hit gem. Zak Rice, an all-region performer at catcher, came from behind the plate to strike out the final Copperhead batter and earn the save.

LDHS scored three runs in the fourth and were led by Hamby, who went 3-for-4 with an RBI. McNuer and Pinson were both 2-for-3 with a run scored.

Patterson said his team still thinks of itself as the underdog in the playoffs, despite a Region 2-4A championship. The Raiders were picked last in the region in the preseason coaches’ poll and have used that perceived lack of respect as fuel this season.

“We’re still that team that nobody expects to win,” Patterson said. “We play with a chip on our shoulder, and we’ve got a shot to win the whole thing. Those guys are taking that, they’re practicing well, and they’re playing good. They want it. They want it more than me, and that’s tough because I hate losing. I love to win, and they want it, so we’ve got a shot.”