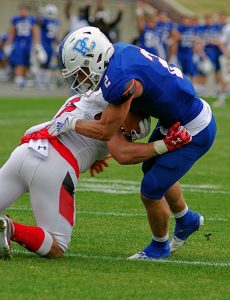 Presbyterian senior Keith Pearson (2) makes a catch for a third-quarter touchdown for the Blue Hose Saturday against Davidson.

Senior Keith Pearson scored the go-ahead touchdown with just under two minutes left in the third quarter and Presbyterian added a Tyler Huff run and a 25-yard field goal in the final period en route to a 29-24 win Saturday over Davidson at Bailey Memorial Stadium.

Pearson and Huff connected on touchdowns of 27 and 5 yards as PC avenged a loss to the Wildcats from three weeks ago at Davidson. Pearson finished with a game-high 11 catches 114 yards – also a game high – and the two scores.

The Blue Hose (3-3 overall, 3-2 Pioneer Football League) also got a record-breaking performance from senior middle linebacker Colby Campbell, who broke PC’s NCAA Division I single-game tackle mark with 25 stops on the day, including three tackles for loss, setting a new Division I career record with 32.

Davison fell to 4-2 on the season and in the Pioneer League.

Read the complete story and a look ahead to PC’s season finale at Drake in this week’s Advertiser.